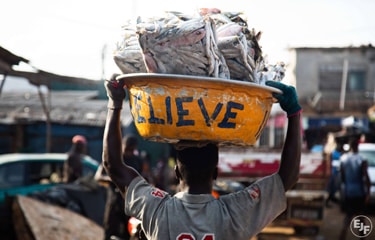 Ghana’s sardine fishery is on the verge of collapse as a result of unsustainable fishing by visiting Chinese trawlers, according to a new report from the Environmental Justice Foundation.

The report examined “saiko,” the trade between foreign trawlers selling juvenile bycatch to Ghanaian artisinal fishers, who sell the fish in coastal communities. Previous EJF reports have claimed industrialization of the process is depleting stocks traditionally fished by artisanal fishers, putting them at risk of collapse.

For its new report, “The ‘People’s’ Fishery on the Brink Of Collapse: Small Pelagics in Landings of Ghana’s Industrial Trawl Fleet,” EJF examined 18 blocks of saiko fish landed at the Ghanaian port of Elmina, finding sardinella present in two-thirds of the blocks. Of the sardinella, nearly all were juveniles below minimum legal landing size. Examination of the bycatch landed by trawlers showed similar results, with 99 percent of the sardinella below legal size, according to the EJF.

“This is extremely worrying, since these young fish are crucial to population recovery, sardinella are already on the brink of collapse, having crashed by 80 percent over the past 20 years,” the report said.

Depletion of local sardinella stocks may result in dire consequences for local fisheries as well as for the foreign firms targeting West African waters for fishmeal production. According to a recent assessment by the United Nations Food and Agriculture Organization, the sardinella fishery shared between Ghana, Côte d’Ivoire, Togo, and Benin is near total collapse.

While Ghana has strong laws on illegal fishing – this year, the country committed to banning all domestic and international vessels found to be engaging in saiko from operating in local waters – enforcement has been weak. Trawlers routinely ignore Ghanaian law on the minimum mesh-size of fishing nets, according to EFJ, which interviewed crews manning some of the trawlers, most of which are Chinese-owned. The statutory minimum fine for use of illegal nets and landing juveniles under Ghana’s 2014 Fisheries Amendment Act is USD 1 million (EUR 919,000), yet there are many examples of fishing firms being relicensed despite refusing to pay their fine or paying just a fraction of what they owe.

“In a time when the world is facing coronavirus, stable livelihoods and food security are even more crucial than before,” EJF Executive Director Steve Trent told SeafoodSource. “Ghana’s fisheries are in crisis, with the country now forced to import half its fish, and canoe fisherfolk coming home from sea empty-handed. The state is losing millions of dollars every year in revenue. The government has the ability to stop this illegal and highly damaging activity now, and it must act to do so without delay.”