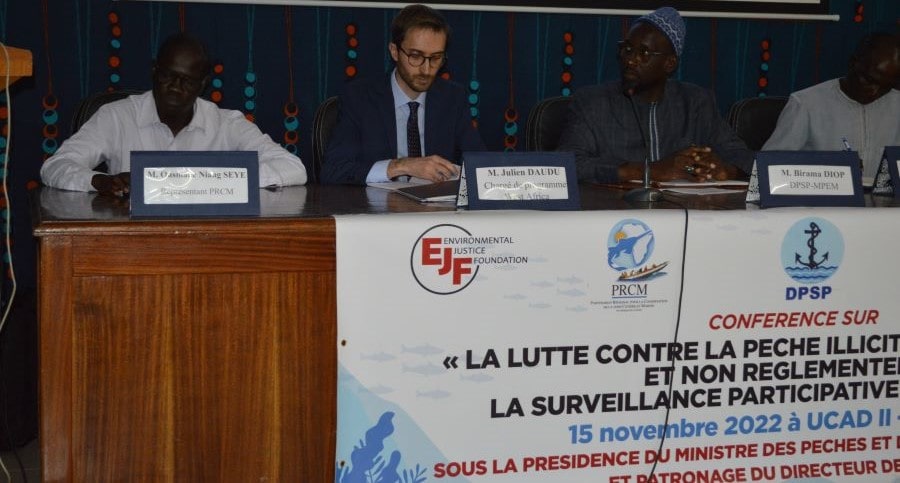 In Senegal, illegal fishing threatens the food security and livelihoods of hundreds of thousands of people. The fishing industry contributes nearly 1.8% to the country’s GDP and provides over 600,000 jobs, making it critically important for the entire country. Many coastal communities rely on small-scale fishing as their only means of survival – yet it is becoming impossible due to illegal, unregulated and unreported (IUU) fishing and an opaque fishing industry.

In 2021, an EJF office was opened in Dakar, focusing on transparency and participatory surveillance. Transparency is an essential solution to illegal fishing. Illegal fishing lets some trawlers catch vast amounts of fish, depleting vital populations and outcompeting small-scale local fishers who play by the rules.

However, data and decision-making are largely inaccessible, and the government does not have the capacity to regulate and stop illegal fishing on its own. Therefore, individual communities must also have the tools to take action to protect fisheries.

On the 15th of November 2022, EJF organised and participated in a conference on participatory surveillance – small-scale fishers and local authorities working together to monitor what is going on off the coast – at Cheikh Anta Diop University in Dakar. This was in collaboration with the Ministry of Fisheries and Maritime Economy, a number of civil society networks and the University. This collaboration with government and civil society is a key part of our efforts to end IUU fishing in Senegal, as we can only achieve this through partnership. The event was therefore an important milestone in our joint efforts to fight illegal fishing, showing a clear, public commitment from the government to work with civil society to do this.

A flagship tool we have developed for communities to engage in participatory surveillance is the DASE app. DASE, meaning ‘evidence’ in the Ghanaian dialect Fante, is a tool that allows its users to record evidence of illegal fishing as it is happening, and alerts authorities of the location and name of the vessel.

It has been designed in a way that is useful for small-scale fishers and local authorities – it uploads evidence later if there is no internet available at sea, it requires little storage space and waterproof pouches are given to protect phones. It can also help to resolve conflicts between different fishery stakeholders by providing concrete evidence of infractions. This app has been launched across West Africa in Ghana, Liberia and Senegal with great success.

The event and new film on participatory surveillance in Senegal, which premiered at the event, were very well received. Students in particular showed interest in co-management, and wanted to learn more about receiving training in participatory surveillance. It is inspiring to see leaders of the future in Senegal showing an interest in combating illegal fishing and transparency – we hope to strengthen this connection and ambition.

For many years, EJF has been working in West Africa to combat illegal fishing, and help restore fish populations for the small artisanal fishers who depend on them. On this trip to Senegal, the team went to Dakar’s fishing port to continue to promote our activities and forge connections with people on the ground there. The offices are expanding their teams and projects as well, and we hope to continue this growth in the future.

In addition to rolling out the DASE app, EJF has also worked to empower small-scale fishers to take a role in fisheries co-management and voice their ideas and concerns, as well as promote alternative livelihood options to diversify local economies away from solely fishing. In Liberia, for example, EJF has helped set up collaborative management associations (CMAs), which give local communities a voice in managing their fisheries, providing them with a network and the tools to ensure transparency in both fisheries management and at sea.

In Ghana, Net Free Seas has been launched, a project which provides both an alternative income stream and opportunity to help prevent killer “ghost nets” from polluting the ocean through collecting and recycling them.

Throughout our work across West Africa, fishers and others directly impacted by illegal fishing are being given the resources and tools they need to end illegal fishing. We are working in close partnership with communities and national authorities to put an end to the illegal fishing that is devastating the ocean around West Africa. Together, we can bring fisheries out of the shadows and ensure a safe, sustainable future for us all.