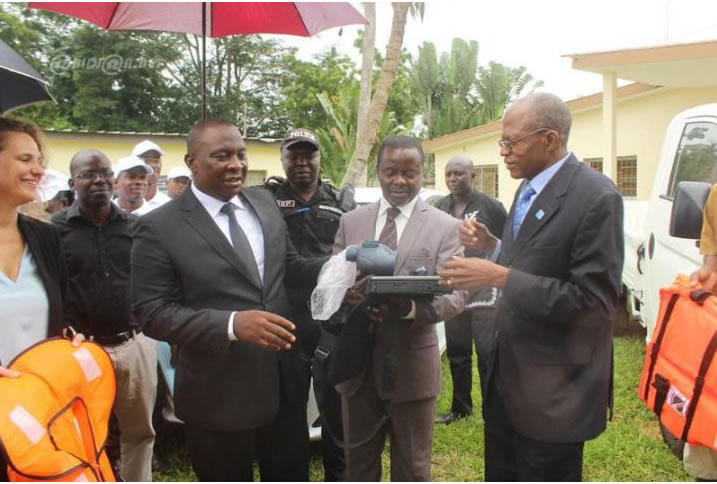 The Minister of Animal and Fishery Resources, Adjoumani Kobenan conducted on Thursday in Abidjan, the handover of equipment to the inspectors’ office of the fishing harbour of Abidjan.

It was during a ceremony held at the Directorate of aquaculture and fisheries, that the minister gave these equipment consisting of a boat, a semi rigid, a four vehicles, an Aquaproof computer, binoculars and outfits in order to strengthen the capacity of the office.

The Director of aquaculture and fisheries, Dr. Shep Helguile expressed his satisfaction with the donation of the European Union which solves many of the problems of management.

According to him, financing problems are an obstacle to the realization of their project, while calling for the release of its 2016 budget.

Daniela Rofi, representative of the European Union said that the port of Abidjan plays a central role in tuna fishing in West Africa, hoping that these EU funds are actually available for the proper and effective implementation of this sectoral support program.

“The number of jobs linked to the tuna industry in Abidjan is 30,000; one can deduce that the number of jobs related to the community fleet is about 21,000. The EU impact on port activities and employment is significant,” she said.

For his part, the Minister of animal and fishery resources indicated that this grant will improve capacity in the fight against illegal, unreported and unregulated fishing representing a scourge for African coastal States.

He also announced the next staffing of the directorate of aquaculture and fisheries with a fisheries highlighting centre, equipped with the latest technologies in the field of satellite monitoring of fishing vessels.

It is important to note that the ceremony ended with the handover of equipment acquired as part of the second phase of the EU sectoral support project in Côte d’Ivoire aimed at building the capacity of monitoring services for a sustainable and more profitable management of the resource. This agreement dates from 1990.

(Article translated in English by the Communications Department of FCWC)
Partagez