Cote d’Ivoire: The Minister Adjoumani At The Ninth Conference Of African Ministers In Charge Of Livestock. 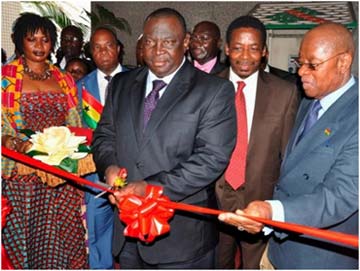 The ninth conference of African ministers in charge of livestock was held, on 18th April 2013 at l’hôtel Ivoire, and will end on Friday 19 th April 2013. Discussion was held upon the following theme« Invest in breeding to speed up regional integration and African prosperity regarding Africa Renewal». At the opening ceremony, the Ivorian minister of Livestock and Fishery Resources, Hon. Kobenan Kouassi Adjoumani, has stated on the importance of Livestock in the African countries development.

According to him, breeding contributes to 30% of Gross Domestic Product (GDP) of Gross Domestic Food Product (DGFP)) and about 10% of the global GDP of the countries in a whole. More than 250 million of poor live on pet breeding. However, this sector is scarcely cared by the governments despite it great growth potentiel.Most of African countries allocate only 4 – 6% of their annual budget to agriculture development . Only 8 member countries of AU-Bira allocate at less 10 % of their budget to Agriculture of which Côte d’Ivoire is included. According the Minister of State, Minister of Home Security , Hon, Hamed Bakayoko, on behalf of the President of the Republic H.E. Alassane Ouattara, allocate at less 10% of his annual budget to agriculture and 30% of the allocation pet breeding .One of the Government priority clearly stated in it National Development Program 2012-2013, sharing 2/3 of manpower and contributes to more than 40% of GDP. For their Concern, the African Union Commissioner in charge of rural economy and agriculture, Mrs Rhoda P. Tumusiime, and the Director AU-Bira, professor Ahmed El-Sawalhy, pet breeding offers wide job opportunity for the African people. The minister Adjoumani was appointed as Chairman of AU-Bira’s Committee in replacement of Uganda Minister in charge of agriculture.