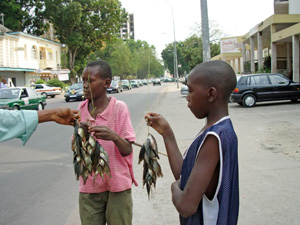 The latest measure is a satellite surveillance system that monitors all the fishing boats operating in the country’s maritime waters.

“The Vessel Monitoring System allows us to conduct surveillance of all the fishing vessels in the sea without exception,” said Dieudonné Kiessiekiaoua, a fishing and aquaculture adviser in the Department of Fisheries.

Kiessiekiaoua said: “The Minister of Fisheries has a screen at his desk that allows him to follow, in real time, the movements of every ship. It’s a measure designed to combat illegal fishing, since we have to ensure sound management of the fish, which are the inheritance of all Congolese. We must safeguard them for future generations who will also turn to them for food.”

Illegal, unregulated and unreported fishing, Kiessiekiaoua said, has had repercussions for the lives of fishermen and all citizens. “When the fish are caught at an immature age, the whole chain is disturbed: the fishermen will not have any money to live decently with their families and it’s certain that there won’t be any more food on our tables,” he said.

The authorities put the VMS system in place with help from the international satellite data group Collecte Localisation Satellites (CLS), based in Toulouse, France. The two signed an agreement in 2006, but the system became operational in February 2011.

Most of the boats plying Congolese waters come from China. Others are from the Netherlands and France.

The VMS results are already living up to expectations.

“The ships that used to fish in restricted zones, notably the six nautical miles that are designated a breeding ground, have been turned back thanks to the VMS system,” Kiessiekiaoua said. “They went toward the recommended fishing area as designated by the fishing law in force since 2000.”

Nature preservation and conservation organizations are not challenging the satellite system and have called for extra support for it.

“I don’t doubt the efficacy of the satellites but you have to have men on the ground to strengthen the surveillance,” said Arsène Guélélé of the NGO Action for the Environment and International Solidarity. “Five or six years ago, because of a lack of supervision, Chinese fishermen were even taking fish fry. If you start taking the fry, will anything else remain in the water?”

A signatory to the UN Food and Agriculture Organization’s Code of Conduct for Responsible Fisheries, Congo banned the practice of fishing with explosives and the use of small-mesh nets in an effort to crack down on illegal catches.

Donatien Animiyo of the Fishermen’s Group of Mpila, said: “Explosive devices were widely used at the end of the civil war in 1997. They destroy the ecosystem and prevent fish from reproducing. There was a time when fish were rare in the markets.

“It’s not enough for the authorities to put more laws in place. What’s important is that they are strictly enforced.”

Despite all the provisions, Congo is far from assuring its own food security. It continues to import foodstuffs, including fish.

Kiessiekiaoua said: “Since each Congolese consumes 25kg of fish per year, we have to produce 100,000MT. We are not currently producing this much and sometimes we have to resort to imports to make up for the deficit. We think that aquaculture, fish farming, and inland fisheries should be developed to fill this gap.”

Fisheries Minister Hellot Mampouya Matson said: “The fishing and aquaculture sector plays an important role in the Congolese economy, especially in terms of the contribution to food security, income-generation, job creation, and livelihoods.”