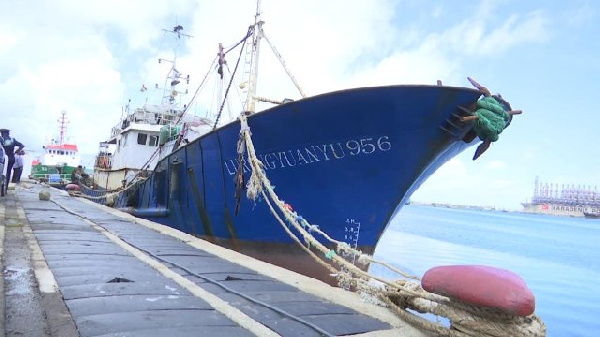 Gyinam Fisheries Limited of Tema has failed to pay the US$1 million penalty imposed on it by government following the arrest of one of the company’s vessels earlier last year for illegally fishing in Ghanaian waters.

The penalty and an additional fine of GH¢ 124,000, was due to be paid by November 8, 2019, by Gyinam Fisheries, following a 30-day period agreed upon by the Fisheries Commission and the management which ended on November 8.

The industrial Chinese trawler, Lu Rong Yuan Yu 956 (AF 756), was arrested by the Fisheries authorities and charged with illegal fishing in the Western Region while heading to Cote d’Ivoire for fishing expedition on Sunday, June 16, 2019.

Consequently, the matter would have to revert back to the court for further direction since the out-of-court settlement had failed, the Ghanaian Times sources have disclosed.

“They have not paid the penalty and so we will go back to court soon,” the source at the Western Regional Directorate of the Fisheries Commission (FC) told the Ghanaian Times, but, did not give a definite date.

The source, however, suggested that the Ghanaian Times contact the Executive Director of the Fisheries Commission for confirmation.

It recalled, that the penalty was arrived at the Fisheries out of court settlement committee in Takoradi, comprising Fisheries Commission, Marine Police, Ghana Navy and Attorney General’s Department arranged an out of court hearing of the case on October 9, 2019 with counsel representing the accused persons and company, Mr Wahid Iderisu Wampouri, the Western Regional Director of Fisheries Mr Godfrey Tsibu-Baidoo.

He explained that Gyinam Fisheries Ltd was penalized in accordance with fisheries infractions which were found onboard the vessel during the joint inspection including 405 cartons and 864 slabs of frozen mixed small pelagic FISH species generally below the minimum landing size, non-logging (non reporting) of catch on board and undersized mesh with sizes of less than the approved 60mm.

The Marine Police brought charges based on the above infractions against the Captain, Chief Engineer and second officer, and two Ghanaian crew members, and they were arraigned before the Takoradi Circuit Court, on June 25 2019, for engaging in Illegal, unreported and unregulated (IUU) fishing.

Mr Tsibu-Baidoo, said, the suspects pleaded not guilty to all the charges brought against them and were granted bail in the sum of GH? 500,000 each with two sureties, one of whom must be a resident of Sekondi-Takoradi.

“The trawler remained detained at the Western Naval Command under detention until full payment of the penalty,” he added.