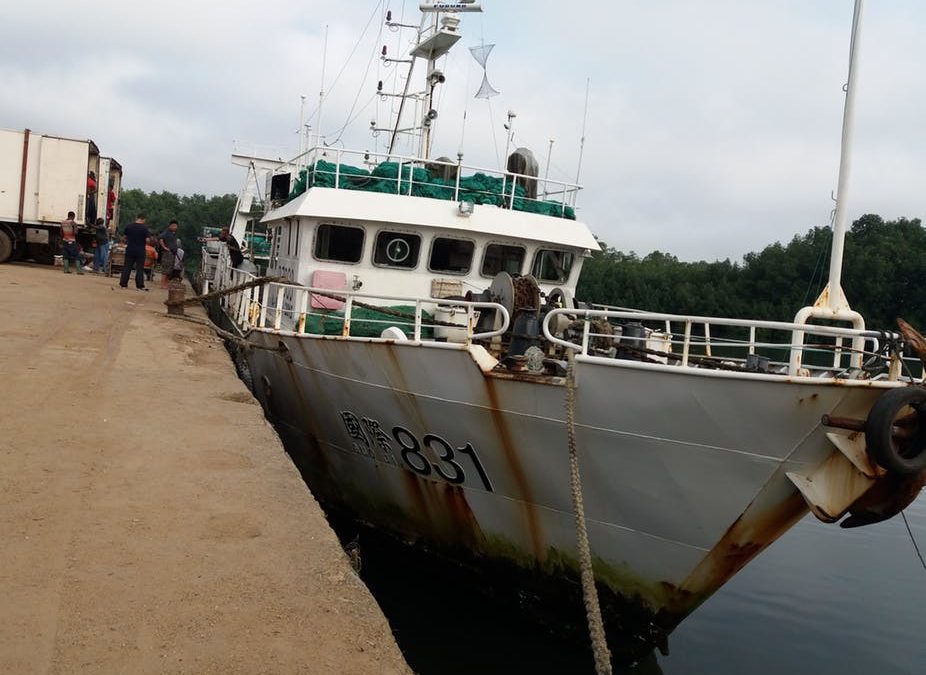 A Chinese trawler offloads its catch at a fishing port in Cameroon. Maurice Beseng 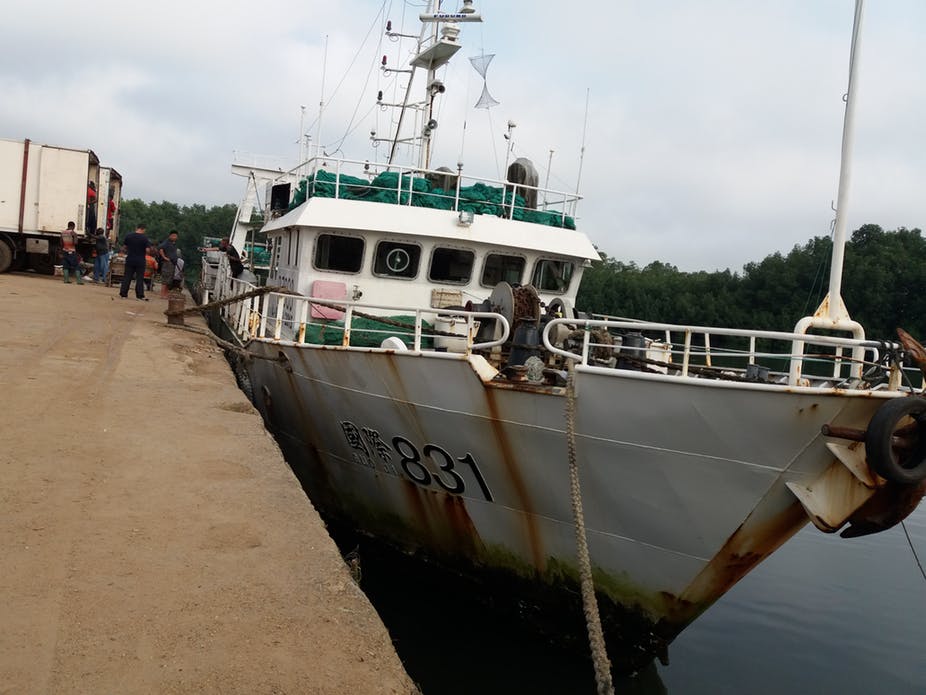 Cameroon’s maritime fisheries, both artisanal and industrial, are largely dominated by foreign fishers.

Industrial fishing is carried out entirely by foreign trawlers predominantly, from China and Nigeria, in partnership with Cameroon fish entrepreneurs. They are licensed to commercially exploit fish stocks beyond 3 nautical miles of the coastline. Their main catch includes croakers, oysters and a variety shrimp species.

Similarly, about 80% of the documented 34 355 artisanal fishers are immigrants from Nigeria, Ghana, Benin and Togo. They operate from around 300 artisanal fishing ports along Cameroon’s 402-kilometre coastline and are allowed to fish within 3 nautical miles of the coast. These artisanal fishers mainly target fish found in shallow depths, such as bonga shad, sardinella, prawns and shrimp.

While most of the industrial caught fish are destined for Europe and Asia, the artisanal catch is mainly sold in local markets. It’s a vital source of animal protein, especially for communities that live along the coastline.

Cameroon’s fisheries sector is of huge social and economic importance to the country. Fisheries makes up 1.8% of the country’s estimated US$35 billion GDP. The sector employs more than 200 000 people and, since 2015, fishers catch an average of 205 000 tons of fish each year. The industrial sector accounts for about 9 000 tons of this.

Despite its importance, the maritime fisheries sector is plagued with largely hidden, or ignored, fisheries crimes.

My research over the past three years tries to lift the lid on the types of crimes that are happening, the actors involved, their networks and how they operate. I looked at both the industrial and artisanal sectors.

My study documented numerous crimes involving people associated with the fisheries sector. But most go undetected. To tackle criminality in the fisheries sector, all concerned stakeholders – from fishers to policymakers – need to be able to identify and report on the different fisheries crimes they see.

I found that there’s an endemic problem of corruption, fraud and the illegal exploitation of and trade in endangered marine species. I also found a link between the fisheries sector and wider transnational crimes such as the smuggling of contraband, weapons and immigrants.

Because of the hidden nature of these offences it’s difficult to quantify the impact they’ve had on Cameroon. There are some insights. For instance, based on government statistics, illegal fishing in Cameroonian waters costs the country about CAF 20 billion (about US$33 million) every year.

If not tackled quickly, these crimes will continue to compromise government efforts to raise income from taxes generated from the sector. Moreover, it will affect the livelihood of millions of people that depend on the sector through job losses, and access to essential food and nutritional security.

I conducted research over a period of three years. I observed fishing operations at industrial and artisanal fishing ports and carried out informal group discussions and semi-structured interviews with state officials, coastal community groups and other civil society organisations. I also analysed existing research and media reports.

I found that in both the industrial and artisanal sectors, fisheries crimes were perpetrated by a variety of stakeholders. These include senior government officials, fisheries officers, elites with stakes in industrial fishing companies, fishers and fish entrepreneurs.

While some fisheries crimes are carried out at sea, most occur on land; in government offices, fish landing sites, beach huts and coastal backwaters, sometimes by those who are meant to protect fish resources. It involved nationals and foreigners, some from as far as China.

Corruption was identified as a major problem. It manifested as bribery and abuse of office. It was systemic and permeated all aspects of the value chain from acquiring fishing permits, catching fish at sea, processing the catch and marketing the produce to consumers. This typifies the corruption landscape in the country as highlighted in other areas, such as the judiciary and police administration.

Corruption has enabled other crimes to flourish. This includes document and identity fraud and the abuse of workers. Some workers (particularly immigrants and children) were illegally recruited into the fisheries sector. Most workers were made to work in squalid conditions.

Corruption also allowed for the illegal exploitation of and trade in endangered and critically endangered marine species, such as dolphins and turtles. Of particular concern was the illegal trade in giant croaker fish bladder. This is a highly valued delicacy in China and, despite the huge volumes I saw traded, there’s little awareness about it.

I also found that the fisheries sector was used to commit transnational crimes, specifically to smuggle weapons, fuel, ivory, rice, fake bank notes and timber products. Most of this happened between Cameroon and Nigeria, Gabon and Equatorial Guinea. Boats were also used to traffic illegal immigrants between Nigeria and Cameroon, and from Cameroon to Equatorial Guinea and Gabon.

There’s currently a national effort to root out corruption which has mainly focused on the judiciary and police. This needs to pay more attention to the fisheries sector. The best option would be to have a subcommittee dedicated to rooting out corruption in fisheries.