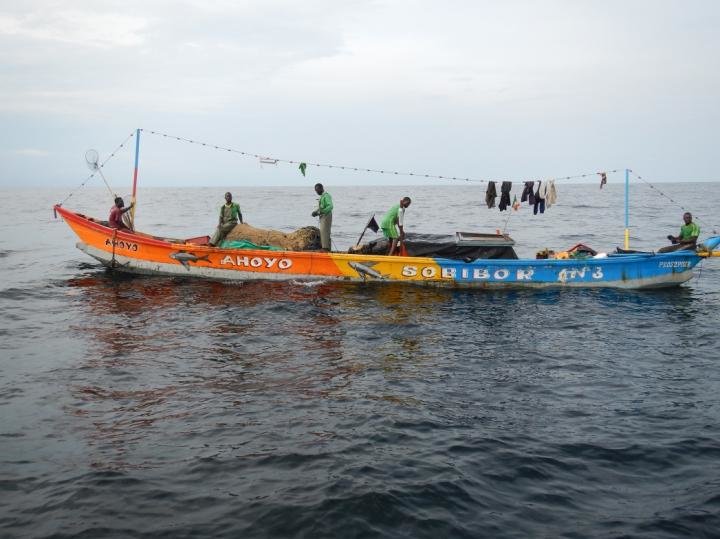 Fishers in Central Africa often cover hundreds of miles in very basic boats without engines searching for food to feed their families and make a living, a new study shows.

Experts from the University of Exeter have tracked the journeys taken by fishers in the Republic of Congo as part of their work with the Congolese Government to protect the local marine environment and improve marine resource management.
This is the first time anyone has recorded in such detail how different types of fishers use the ocean in this part of Africa. Researchers fitted 41 boats across 28 different sites with GPS trackers to see how far they travelled between February 2014 and March 2015, with the data representing 875 individual fishing trips.

They collected 5,500 hours of tracking data that covered a total distance of 9,500 km.

Boats were tracked from several sites, including the city of Pointe Noire and a national park, and the results showed very different strategies according to location.
Fishers based in city typically travelled up to 120km offshore for up to six days in wooden boats with small engines. They had no safety gear and the expeditions were highly risky. Fishers based in more rural areas undertook daily fishing trips up to eight km offshore in simple boats with no engine.
Many of these fisheries-dependent communities are angry that fishing boats, working illegally and sometimes in National Parks, are harming stocks by overfishing in areas they have traditionally used to provide food for their families and earn a living. Industrial fishing vessels have allocated spaces to work in, but small-scale fishers complain they are fishing in parts of the ocean reserved exclusively for them. This has huge impacts on fishers in more rural areas who can’t invest in better boats and equipment which would allow them to fish in different areas, or further offshore.
This work is part of a Darwin Initiative project, funded by the Department for Environment, Food and Rural Affairs, to improve the livelihoods of fisheries-dependent communities and conserve marine biodiversity in Central Africa. Experts from the University of Exeter are working with representatives from the Government of the Republic of Congo, the Wildlife Conservation Society in Congo, and local NGO Rénatura to develop a marine spatial plan that will improve marine resource
management and protect important marine life for which this region is globally important.
Dr Kristian Metcalfe, from the Centre for Ecology and Conservation (CEC) at the University of Exeter who undertook the work in Congo, said: “We have found that fishers working in the city go further, faster, fish in deeper waters and for longer, whereas fishers in more rural areas are dependent on making daily fishing trips, and these are much more physically demanding.”
Professor Brendan Godley, from the CEC said: “Using GPS trackers is an example of how, with the collaboration of fishers, relatively low-cost technology can be used in developing countries to collect data which can be used to better understand how fishers behave — this is important to ensure that management decisions do not compromise local livelihoods.”
Source: https://www.sciencedaily.com
Partagez