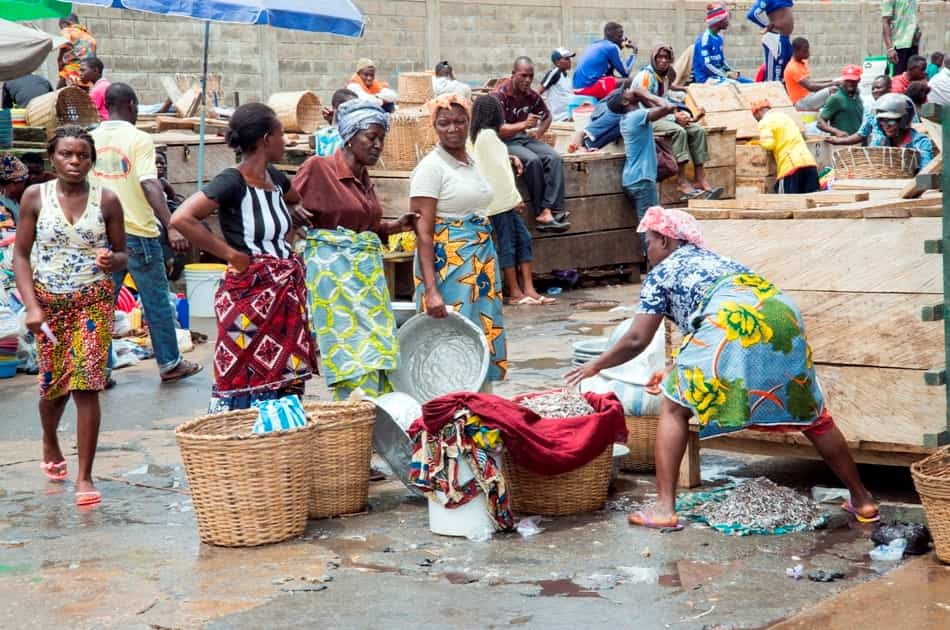 Women fish processors in Côte d’Ivoire (Ivory Coast) have been looking to gain greater access to affordable fish over the course of a long-running collaborative campaign.

Women play a vital part in the fish value chain on the Côte d’Ivoire, where seafood is the main source of animal protein for the population, as is the case in many African coastal states. They trade, dry, salt, smoke, and market fish from the local artisanal fishery from mid-July to mid-November, and import frozen fish from Mauritania and Senegal.

For the remainder of the year, they rely on processing and selling “faux thon,” which is the undersized and damaged tuna unsuitable for the canneries, including skipjack, bullet tuna, yellowfin, bigeye, and little tunny, the most common tuna in the Atlantic Ocean.

The fish is landed by Spanish and French purse-seiners into Abidjan, the most-important tuna port in the Gulf of Guinea. The port has three international tuna canning factories that employ more than 3,000 people and produce 60,000 metric tonnes (MT) of cans and loins. Bycatch species such as marlin, sailfish, wahoo, dolphinfish, barracuda, triggerfish, and shark are also landed.

The “faux poisson” and “faux thon” have traditionally been given to fishing crews at the end of each trip, who sell it on to local middlemen and they, in turn, sell it to the women at inflated prices. Such fish used to represent a small part of the landing, but in recent years, volumes have grown to significant proportions as a result of increasing local demand in Abidjan city and bycatch associated with fish-aggregating devices (FADs).

Industrial tropical purse-seiners deploy FADs equipped with satellite linked echo-sounder buoys, which provide them with an accurate geo-location of the object and a rough estimate of the biomass aggregated underneath it, making it easier to exploit shoals of tuna.

As part of urgent conservation measures, however, 53 nation members of the International Commission for the Conservation of Atlantic Tunas (ICCAT) agreed in December 2019 to a two-month Atlantic-wide ban on FADS in 2020, and a three-month ban in 2021. The hope is that these measures, along with quota cuts, will help to reduce catches of major tunas.

“Over the past decade or so, the women have suffered from a declining availability of artisanal fish as a result of poor management of the stocks, and exploitation from the middlemen they rely on for access to the faux thon. They often find themselves working hard for very little return and unable to pay off their debts,” Coalition for Fair Fisheries Agreements Coordinator Beatrice Gorez told SeafoodSource.

A Belgium-based NGO, the Coalition for Fair Fisheries Agreements has been working with women in Côte d’Ivoire and their cooperatives since 2015 to help them gain better access to tuna supply.

“The past five years have not been easy, but bit by bit, progress has been made,” Gorez said.

Gorez first brought the plight of the Côte d’Ivoire women to the attention of the European Commission in 2015 at a conference organized by the Long Distance Fleet Advisory Council, of which her organization is a member. Since then, Gorez has raised questions in European Parliament and has lobbied member states and the commission – all in an effort to keep the issue alive.

“The request was simple; when there is no local fish available, help the women to gain direct access to 10,000 metric tons of faux thon through their national organization, instead of having to go through intermediaries. This small change would improve the accountability of the fish, ensure a fair price, and improve the socio-economic well-being of the women, their families, and local communities,” she said.

Gorez and the women have called for a fund to be set up to help them purchase initial quantities of fish in order to get their businesses off the ground. The money would also be used to invest in additional FTT-Thiaroye Ovens, which were introduced in Côte d’Ivoire by the FAO as a simple but efficient alternative to traditional fish-smoking methods.

“The smoking ovens have transformed the lives of the women who have access to them by providing a healthier and more hygienic work environment, instead of having to stand over smoking barrels. The end-product is also more consistent and of higher quality, while the ovens use minimal amounts of wood and produce less smoke than the traditional open fires,” Gorez said.

Many more ovens are still needed to improve the working conditions for all the women processors. Gorez said she is pleased that five years of effort is finally having a result, but explained that while having an agreement on paper is a good start, resistance remains from the middlemen. These liaising figures have “understandings” with the boats and local authorities, she said, and fear the loss of part of their own trade.

“We need the E.U. to keep the pressure up on the Côte d’Ivoire, to make sure that the women can actually buy the tuna from the boats and change their lives. And in the meantime, the women’s cooperatives are organizing local activities to make sure the authorities know that they mean business,” Gorez said.