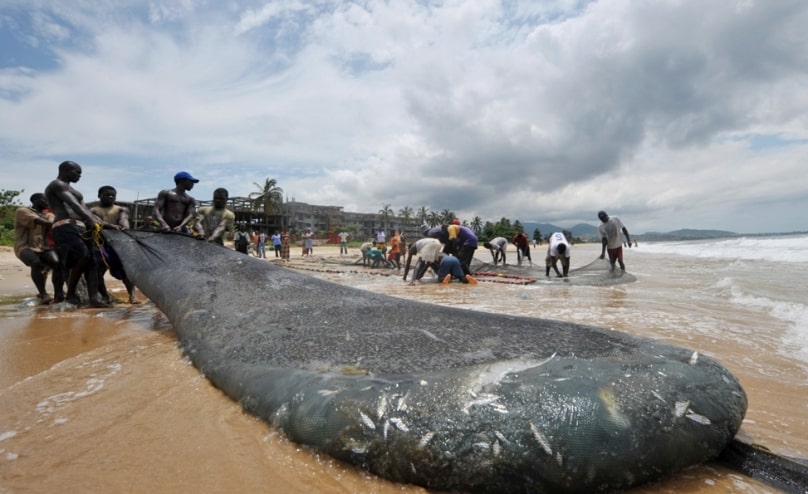 Fishermen from Sierra Leone pull a net from the water on September 26, 2009 on a beach in Freetown. AFP PHO

In April, Sierra Leone took drastic action to combat illegal, unregulated and unreported (IUU) fishing in its territorial waters in a bid to protect its valuable marine resources.
The government declared a one-month ban on industrial fishing, much of which is undertaken by unregulated Chinese and South Korean fishing boats.
According to the UN Food and Agricultural Organisation, illegal fishing is worth an estimated $2.3bn annually in the northwest African sub-region of which the country forms a part, accounting for up to 20% of the global loss from illegal fishing.
The ban, which also required fish to be sold in local markets only, was applauded by local fishermen, who have seen hauls dwindling and profits decline.
“We are happy the government has declared a fishing ban after a series of complaints from us,” said Alpha Kamara, leader of the National Fishermen’s Consortium. “Industrial fishing boats are depleting fish stocks.”
The government insisted that a one-month ban would allow time to replenish depleted stocks. Yet there is significant debate over whether time-limited local bans are a successful way of tackling a multinational problem that stretches across maritime boundaries.
Some experts argue that a window of at least 90 days would be required to replenish stocks, while critics say that the industry requires structural change if West African countries are to truly reap the benefits.
“The fact that there is a measure to try and reduce the pressure on resources is salutary, but this is insufficient,” Ibrahima Cisse, senior oceans campaign manager for Greenpeace Africa, told Reuters.
Fertile fisheries
West Africa’s territorial waters comprise some of the most fertile fisheries in the world. In West Africa, about 7m people depend directly on fishing as a source of income, according to the UN.
West Africa’s rich fisheries have traditionally attracted international attention from fisheries in Portugal, Spain and Italy.
In recent years, South Korea and China have been attracted by the booming demand for seafood in their fast growing economies. But much of the activity remains murky. Industrial vessels are accused of engaging in a spate of illegal practices, including fishing without licences, using illegal nets, flying false flags, disguising their identities, under-reporting their catches and trapping local fishermen using predatory practices.
An inevitable outcome of these practices has been overfishing, causing severe strain to lives and livelihoods in West African communities that depend on the resource.
It has been estimated that over 300,000 jobs have been lost to illegal fishing in the region. Local artisanal fishing boats have complained of stalking and strong-arm tactics by industrial boats, and some pundits believe the recent rise in piracy off the West African coast can be partly linked to the decline in local employment.
Sierra Leone is estimated to lose $29m annually due to IUU fishing – a figure that represents around a tenth of the country’s education budget.
The problem of “aggressive poaching” has somewhat abated in recent years following action from China to curb its ships’ illegal fishing in foreign waters.
From 2016 to 2018, China cancelled subsidies worth $111.6m for 264 vessels caught undertaking illegal, unreported and unregulated fishing in West Africa, according to Greenpeace.
The EU has funded improvement projects to help West African countries better coordinate their response to illegal fishing.
Many vessels that previously operated in an illegal manner have attempted to gain government approval for their activities. But despite improved regulation, others still resort to banned practices.
Limited institutional capacity
Within West Africa, the institutional capacity and political will to deal with the complex web of problems remains limited and sidelined by corruption.
Steve Trent, executive director of the Environmental Justice Foundation, an NGO that has previously provided technical assistance, a patrol boat and logistical support to the Sierra Leone government, says that his team has offered specific intelligence on illegal operators and boats only for the information to be ignored. He blames the inaction on corruption within the Sierra Leonean government.
“You can have corruption in any country, not just Sierra Leone,” he said.
“All too often officials were turning their eye the other way. I think it is a fairly reasonable assumption to say that those who should have been exercising their duties were either being told not to, or did not want to – and that speaks to corruption.”
While Sierra Leone’s temporary ban gives the impression that the country is finally taking a tougher line, experts are agreed that any serious attempt to tackle the problem of illegal fishing must be a coordinated effort by all the countries on the West African coastline.
A 2016 report from the UK’s Overseas Development Institute argues that West African governments must increase their transparency and data collection efforts if they are to make further progress.
“African governments and their trading partners should disclose in full the terms of fisheries agreements, including information on quotas and prices as well as any agreed licence and charter agreements.
“Additionally, declared catches should be regularly compared with data reported to the FAO and other agencies.”
Such action could help to create new jobs and revive moribund fishing communities, according to the organisation.
“Ending IUU fishing and developing strong national and regional fishery sectors would generate multiple benefits for development. Those benefits would not occur automatically. Governments in the region need to do far more to develop processing sectors equipped to add value to the fish caught in their waters, and to support regional trade.
“However, with the right policies in place we estimate that more than 300,000 new jobs could be created, with artisanal fishers linked to consumers through a vibrant trading network.”
Trent said they were ready to go back to Sierra Leone to contribute their expertise and resources to solving a problem that is “really very simple to solve” if there is the political will.
“If the president asks and agrees to support us, we will go back,” he said.