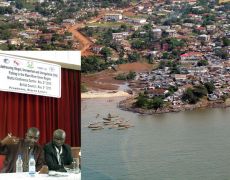 The purpose of the meeting was to discuss ‘best practice options’ for addressing IUU fishing in the region and ways forward with regard to collaboration between government agencies, local communities and civil society organisations within individual countries, and at the regional level within the Mano River Union (MRU) (Côte d’Ivoire, Guinea, Liberia and Sierra Leone). From SIF’s perspective, one of the main objectives was to identify ongoing support to Sierra Leone and other MRU countries in fighting IUU fishing and to look into options for integrating the work at national and sub-regional level into the overall policy reform processes underway on the continent.

Some of the main topics discussed included: impacts of IUU fishing (social, economic and environmental) and drivers (need, greed or ignorance); actions and activities by various players in the region (e.g. the EU and the World Bank); governance; involvement of local communities in stewardship of resources (including monitoring, control and surveillance); national inter-agency and departmental coordination and cooperation (e.g. the Joint Maritime Committee in Sierra Leone and the equivalent in Liberia); transboundary collaboration, within MRU and the various fishery bodies in the region.

It was noted that adequate policy at the regional level is in fact in place to move forward, for example through the recommendations resulting from the Conference of African Ministers of Fisheries and Aquaculture, the Statement on IUU fishing of the Economic Community Of West African States (ECOWAS), the Fisheries Committee for the West Central Gulf of Guinea (FCWC) IUU Fishing Declaration, the Sub-Regional Fisheries Commission (SRFC) Year of IUU fishing. Furthermore, it was proposed that it was essential to ‘make the most out of what you have got’ – this could be done by further involving local communities in MCS (e.g. for reporting), improving the coordination of national agency efforts to facilitate cooperation at a national level, and working towards improving information-sharing and collaboration at the regional level. Importantly, there needs to be links and mechanisms that allow information to move between these levels.

A key element of the meeting was the possibility for South-South exchange and cooperation. To this purpose, although much attention was given to the situation in Sierra Leone, representatives had been invited from organisations and agencies working in other Mano River Union countries as well as from Asia. These participants gave presentations and participated actively in the discussions and thus shared their experiences as well as learned from others’. Further building on this exchange, on the final day of the meeting, participants went on an excursion to Sherbro Island, to meet with the fisheries communities there and discuss their experiences.

A much welcome announcement was made at the opening of the meeting, by the Honourable Minister of Fisheries and Marine Resources, Joseph Koroma – Sierra Leone had decided to permanently close the country’s international ships’ registry (SLISR) to foreign-owned fishing and fisheries support. One reason for this was the fact that it is Flag State of a vessel that has the responsibility for monitoring and controlling its activities – an action that is currently not possible for the Sierra Leone Government to undertake (particularly for vessels operating in other parts of the world).