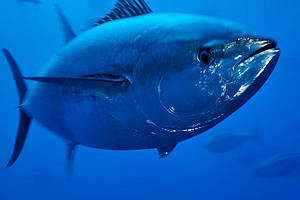 Amsterdam/Rome, 11 May 2011 – International conservation organisations WWF and Greenpeace have called for the forthcoming industrial purse-seine bluefin tuna fishing season in the Mediterranean Sea to be suspended.

The groups, advocating for the rescue of the iconic fish species, the restoration of the Mediterranean marine environment and a centuries-old fishing industry, sent an urgent request to members of the organisation meant to manage the fishery – the International Commission for the Conservation of Atlantic Tunas (ICCAT).

The call follows a late intervention from Libya that it will now allow fishing in its waters despite having no agreed fishing plan for the season. This would make any fishing activity by Libyan fleets illegal, according to ICCAT rules. The current unrest in Libya means there is no chance of effective monitoring and enforcement of the fishery in its waters, risking fatally undermining an internationally agreed recovery plan for the severely overfished species.

There are reports that several Libyan vessels, legally unauthorized to fish for bluefin, have left Malta bound for Libyan waters. Greenpeace and WWF share the belief that ICCAT member states should have prevented their departure.

Both organisations have reminded the French government of its particular responsibilities, since ten Libyan-flagged purse seine fishing vessels are owned by French interests. Illegal Libyan vessels are now ready to set sail for the Libyan fishing zone from European ports in France (Sète) and Malta.

“Unless members of ICCAT take urgent action they will appear more determined than ever to undermine the management plans that at best will give Mediterranean bluefin a few years to survive,” said Sebastian Losada, Greenpeace International Oceans Policy Advisor. “If we want bluefin tomorrow, ICCAT must control the fishery – this is currently impossible in Libyan waters. This means ICCAT member countries must agree to suspend the fishery to protect their own plans to recover the species.”

“Tough times require tough measures,” said Dr Sergi Tudela, Head of Fisheries at WWF Mediterranean. “The painstaking and fragile achievements of the last years are endangered by the maverick attitude of a small minority. Responsible members of ICCAT must rally to do what is necessary to save this species and fishery. Only vigorous action now can prevent Atlantic bluefin tuna from plunging into a new Dark Age before it has even emerged from the last one.”

The demands from the two groups follow Libya’s announcement that it will engage in illegal fishing for bluefin tuna this year, ignoring ICCAT’s request to avoid tuna fishing in Libyan waters, as the current political situation there would make monitoring and enforcement of fishing activities impossible.

“It would be even more scandalous that in the current difficult situation affecting Libya, French interests would benefit from access to the fishing resources in Libyan waters,” said Sebastian Losada of Greenpeace. “The international community is responsible, more than ever, for the conservation of those resources for future generations.”

“Given that illegal Libyan vessels are ready to set sail from France and Malta if not stopped in their tracks, European Union institutions also bear a significant responsibility to ensure this year’s purse seine fishing season is closed,” said Sergi Tudela of WWF.