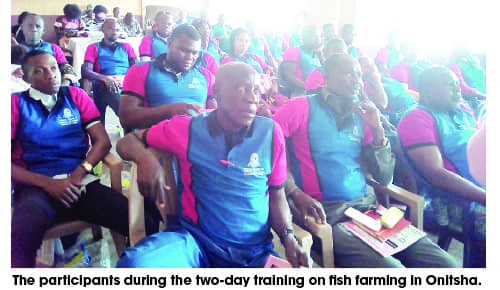 The lawmaker representing Onitsha North and South Federal Constituency of Anambra State at the House of Representatives, Lynda Chuba Ikpeazu, recently organised a two-day fish farming training for youths and women of the constituency.

The training was handled by the Federal College of Fisheries and Marine Technology, Lagos. At the end of the training, the college issued certificates and 100 fish fingerlings to 26 participants, while the lawmaker gave them take-off grants to start their own fish rearing business.

The participants were selected from various groups and organisations, including Catholic, Anglican, Pentecostal churches, Muslim groups as well as the army and police wives’ associations in the constituency.

A senior lecturer of the college, Dr. Kalu Elezuo, taught them the major elements of fish farming such as soil texture, climate, type of fish, ponds, and water quality, among others.

Senior special adviser to the lawmaker on political matters, Chief Frank Onuorah, said the training was part of Ikpeazu’s empowerment programme to her constituents, saying that she had also trained over 300 people in December last year in fish farming.

“She is doing very well,” he said. “After the election in 2019, she organised one empowerment programme, and, before Christmas, she did another empowerment programme, where she distributed items to the people of the constituency and also trained over 300 people in fish farming.  And this is another training.

“I know that she is going to perform more than expected this time. You know that there are many road networks in Onitsha as well as electricity transformers attracted by her. She is doing well and my advice to the people of the constituency is to have patience with her. As time goes on, they will get to know Lynda better. She is one in ten million.”

He advised the participants to adhere to what they were taught and put the training to practice, noting that it would serve as a source of income for them, and they could access loans, if they wanted to go into commercial fish farming.

The facilitator and leader of the training team from the college, Dr. Issa Adenigbga, said that the college is known with the mandate to produce middle level manpower equipped with technical knowledge and vocational skills in fisheries technology.

“Our expectation is that after this training, they will take off where we stopped. For instance, they were trained in fish feed production. They are expected to produce this fish feed after we might have left, either for small-scale level or for commercial purposes. We also trained them on how to produce fingerlings, which is baby fish. It is either they produce it for their own farm or for commercial purpose.

“We are going to assist any of them that wanted to go into commercial fish farming with free services. We love the way the participants comported themselves throughout the two-day training. They showed total commitment and we strongly believe that they got the best us out of the training. So, our advice is that once they leave this place they would be able to start their own farm,” Adenigba stated.

A Senior Legislative Assistant to the lawmaker, Mr. Uche Okwi, while given the participants cash gifts to start their business, urged them to utilise the opportunity to be self-reliant and an employer of labour.

He said the lawmaker believed in the Chinese adage that “it is better to teach a boy how to catch fish than to give him fish,” noting that Ikpeazu had succeeded in organising various skill acquisition trainings such as tailoring, livestock, bead making, hair and barber’s salon skills, among others.

Okwi said that those trained by the lawmaker in various skills last year were currently doing well in their various businesses and had empowered others who were in their payroll, saying that more training and empowerment programmes were coming to the constituency.

Some of the participants, including Cicero Ogbuli, Chigozie Okafor, Amina Bello and Christian Chukwu, thanked the lawmaker for the free training and cash empowerment to start up their own business.

They, however, promised to establish their own fish farm to start on a small scale before going into full commercial venture. They urged other lawmakers and politicians to empower the youths and women through such training in order to create jobs and reduce the spate of unemployment in the society.