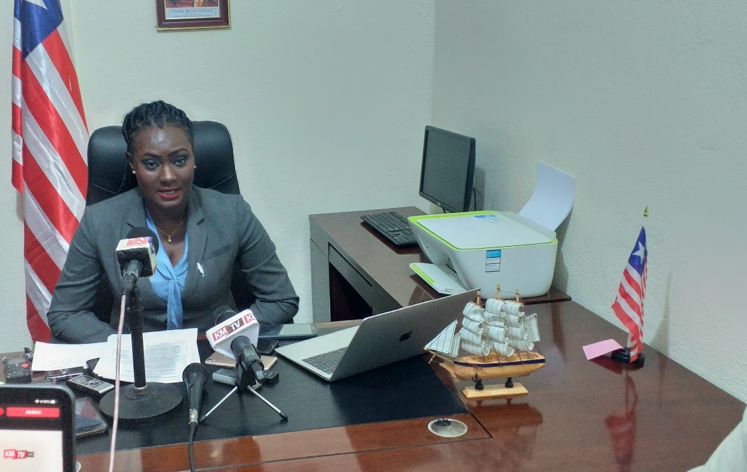 Monrovia – The Director-General of the National Fisheries and Aquaculture Authority (NaFAA), Emma Glasco has announced a new fee structure for fisherman operating in Liberia’s territorial waters based on their engine capacity.

Making the announcement at her first press conference of the New Year on Thursday, Madam Glasco said the new measure is part of management’s programs to resuscitate the sector and increase revenue generation.

Madam Glasco said the new fee structure will affect only 600 motorized engine and semi-industrial boats out of 4,300 small canoes.

Under the new structure which takes effect immediately, owners of paddling canoes will pay the sum of L$3,200 annually.

This group, according to Madam Glasco, will receive no increment in fees until the government provides the necessary subsidies such as outboard motor engines and nets to improve their capacity.

Those operating between 41Hp and 100Hp will now pay US$1,000 annually; will operators of migrant or seasonal canoes have been charged US$1,250 yearly.

Giving detail reasons for the increment of license fees, the NaFAA boss stated that the fisherman has been operating without a legal fee structure.

The ‘gentlemen’ agreement with previous administrations, she said was depriving government of needy revenues and not consistent with international standards.

Liberia, in the 1970s was one of Africa’s leading fisheries nations. Statistics showed the country generated at 40 least million from shrimp fishery harvested within the three nautical mile limits where the country has bulk of its marine reserved, considering the deep, steep and narrow continental shelf of Liberia.

However, there has been a significant decline following the civil; although there have been several measures put in place to revamp the sector.

In 2010, the Government established the six-nautical mile limit, a fishing zone reserve for only subsistence/artisanal and semi-industrial fishing activities.

However, the NaFAA boss said this zone has been underexploited as local fisherman lack the capacity and improved fishing technology to harvest.

Because this zone prohibits industrial fishing activities, she disclosed that many industrial fishermen have pulled out of the domestic fishing registry.

Areas beyond the six-nautical miles, she added, is deep and narrow, and require high fuel consumption for harvest which is low.

“The entity incurred great losses in revenue as there is limited fishing activities in this zone. Local fishermen cannot harness fish to their maximum potential,” she said.

“Fisherfolks are affected by low-income earnings, resulting in increased importation of fish product from neighboring countries such as Sierra Leone, Ivory Coast and Ghana, thus leading to huge loss in revenue generation as well as greatly affecting Liberia’s dietary animal protein which 65 percent of our population depends on.”

In order to compete with other fishing countries of the region including Gambia, Sierra Leone, Ivory Coast, Guinea and Ghana, the NaFAA Director-General called on the local fishermen to be fair enough to pay for the resources harvested.

This, she noted, will allow the government to provide subsidy to fishmongers and develop a robust semi-industrial program to include a value-added component such as processing facility.

She added that the authority will not allow any fisherman in its territorial waters without a valid fishing license.

To ensure compliance, a fishery taskforce comprising of Liberia Coast Guard, Immigration officers and the Liberian National Police will effectively monitor and control the waters.