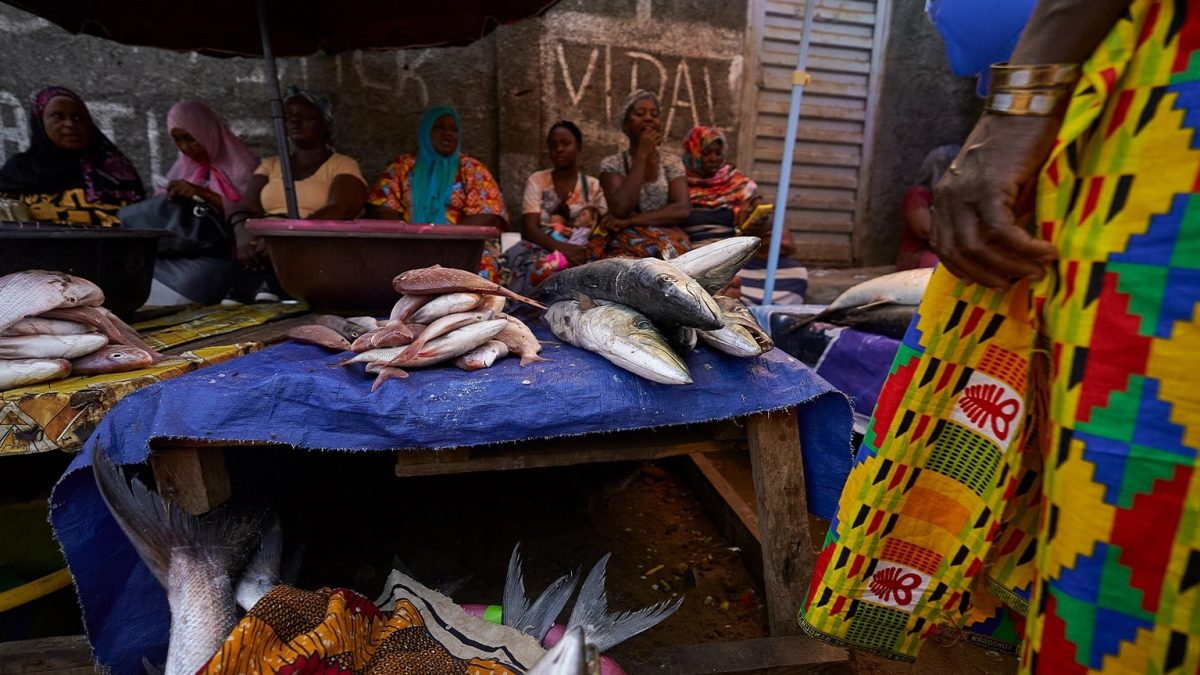 FREETOWN, Sierra Leone — As dawn breaks, the fishing wharf at Tamba Kula in Freetown buzzes with the movement of early-morning commerce. Fishers just back from days spent far out at sea unload their catch from wooden boats, hauling snapper, barracuda and other fish out of icy compartments into cartons carried onto shore. There, women hand over wads of cash and fill plastic containers destined for Freetown’s bustling markets. Bleary-eyed fishermen cluster in packs under palm trees, smoking cigarettes and cracking jokes as Nigerian pop music blares from nearby speakers.

The scene is a familiar one along West Africa’s coast, where artisanal fishers like the ones at Tamba Kula provide millions of people with their daily nourishment. The ocean is the backbone of life in Sierra Leone, with fish accounting for around 80% of the country’s protein intake. Incomes generated from the sea build houses, are reinvested in businesses, and send the children of fishers and market traders to school.

But life is getting harder in places like Tamba Kula. Over the past few years, fish have become scarcer, and the rickety boats with names like “God No Greedy” are having to go farther out to sea for catches that just a few years ago could be found much closer to shore. Sometimes the crews come back near empty-handed. When that happens, the boat owners lose their upfront investment in fuel and the crews don’t get paid.

Many fishermen say foreign trawlers are to blame. Those boats, made from steel and fiberglass, use industrial equipment to catch hundreds of times more fish than the small wooden boats can. In a competition playing out on Sierra Leone’s seas, its artisanal fishing communities are losing.

“When they come with their nets and catch all these fish, we can’t get our catch,” said Saio Kamara, Tamba Kula’s youth association chairman. “And that means we are spending all our money to go to sea for nothing.”

Red in oar and hook

Overfishing isn’t a new problem in West Africa, where industrial fishing boats from across the world harvest massive quantities of seafood for both local and foreign markets. Many use ecologically destructive practices like bottom trawling, where vessels drag huge nets across the ocean floor, indiscriminately scooping up anything too big to escape and churning up corals, rocks and sediment. In Ghana, for example, a report by the Environmental Justice Foundation (EJF) last year found that fish populations are on the edge of collapse, with the total landing tonnage caught by artisanal fishers declining by more than a third between 1996 and 2016. In 2018 alone, artisanal landings dropped by 13.8% compared to the preceding five-year average.

Among Ghanaians who earn their daily bread in the fishing economy, more than 80% surveyed by EJF said they were earning less than they did five years ago. They also said it was much more common for them to encounter industrial trawlers while out at sea than in previous years.

Ghana isn’t alone in its struggles with overfishing. In Sierra Leone, accurate data on fish populations are hard to come by: a long-planned stock assessment has yet to be completed due to funding gaps. But in 2019, one of the researchers in charge of the study said its preliminary findings indicated the country’s fisheries were “approaching a critical level.”

“The money we generate is not actually enough to fund fish research,” said Sheku Sei, an assistant director at Sierra Leone’s Ministry of Fisheries and Marine Resources. “We have to do surveys twice a year to count our fish stocks and know their abundance, but we haven’t been able to do that.”