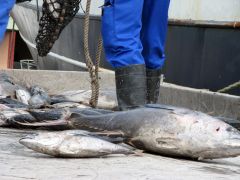 In August 2011, a partner of Stop Illegal Fishing, the Trygg Mat Foundation observed that the fishing vessel Playa De Azkorri, flagged to Belize, had been moving in patterns normally associated with fishing using purse seine gear in the waters of Liberia. The Playa De Azkorri has previously been the focus of IUU fishing investigations conducted by two European governments and it has also been suspected of supplying IUU fish into the EU market. The Liberian Fisheries Administration (The Bureau of National Fisheries, BNF), confirmed that the vessel was not licensed to fish within Liberian waters during this period. Soon after this, the vessel stopped transmitting its position but later in the month, when transmission restarted the vessel was again within Liberian waters, again, moving in patterns normally associated with fishing, and again, without a valid licence.

Following this, the tracks of other vessels observed within Liberian waters were examined. Three more vessels, namely; Egaluze, Gueriden and Jean Louis Raphael 2 were identified to have left similar ‘fishing’ associated tracks during June and July 2011. More recently, in January 2012 the Trygg Mat Foundation has compiled a revealing report documenting the movements of fishing vessels in Liberian waters between September 2011 and January 2012.  The report indicates that a number of vessels, including the: Cap Bojador, Doniene, Egaluze, Jean Louis Raphael 2, Juan Ramon Egana, Playa de Azkorri, Playa de Bakio, Premier and Via Euros, again show tracks usually associated with fishing. Investigations by Stop Illegal Fishing indicate that the vessels did not possess legitimate fishing licences for Liberian waters during this time. These vessels fly the flags of Belize, France, Spain and South Korea.

Illegal fishing is rampant not only in West Africa but across the continent, and this is an issue that needs to be addressed, not only to deter illegal fishers and prosecute those caught, but also to ensure that our African fisheries resources are used sustainably to the benefit of the citizens to which they belong.

Stop Illegal Fishing, a working group of the NEPAD Agency’s Partnership for African Fisheries, will continue to work in cooperation with its partners, including the Fisheries Administration of Liberia (BNF), the West Africa Regional Fisheries Programme (WARFP), the members of the regional fisheries body the Fisheries Committee for the West Central Gulf of Guinea (FCWC), and the Trygg Mat Foundation to engage with the flag States and market States to ensure that all States take seriously their obligations to stop illegal fishing in African waters.