Ghana to outdoor Watchdog Committees to clamp down illegal fishing 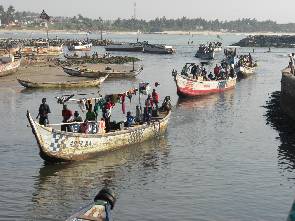 The West African nation, Kasapafmonline.com understands, have spent thousands of Cedis to train some fishermen to form Fisheries Watchdog Committees across its coastal belt with the first of such Committees to be outdoored at Ada in the Greater Accra Region.

Located in the eastern part of Greater Accra Region in the South east of Ghana, Ada is one of the biggest fishing communities in the former Gold Coast.
It is the District Capital of the Dangme East District. The district’s coconut palm fringed coastline is 45 kilometers long and provides a living to many people that are employed in fishing and fish processing.
These Fisheries Watchdog Committees will be working directly with the Fisheries Enforcement Unit under the Ministry of Fisheries and Aquaculture as well as the Fisheries Monitoring Control and Surveillance Unit of the Ghana Navy to ensure that the activities of illegal fishing are brought to a halt.
Overuse of unlawful fishing practices such as light fishing, pair-trawling alongside the use of harmful chemicals such as DDT, washing powder and dynamite; have caused the former British Colony’s fish stock to decline rapidly resulting in Ghana losing US$100million each year.
The West African nation’s fish sector, according players in the industry, adds about US$1billion to government revenues annually and provides livelihood to about 10% of Ghanaians covering about 4million fishers and their dependents.
The Minister for Fisheries and Aquaculture, Elizabeth Afoley Quaye, commenting on the initiative in an interaction with Fiifi Banson on Kasapa 102.5 FM said the watchdog has become necessary to compliment that are already being implemented by the Government in order to increase the country’s fish stock.
The watchdog committees, she noted, are made up of trained fishermen “who will patrol our water bodies, especially, the sea all the time and at any point in time, if they see somebody practicing light fishing, they will arrest that person.”
“At the moment we are trying to build the fish stock and if we put a stop to the illegal fishing practices, we shall succeed,” she noted.
Ghana, she added, has started practicing partial close season where the Ghana Industrial Trawlers Association and Tuna Fishermen are currently on leave to allow the target catch some breathing space to grow. Those expected to follow suit in this initiative are the artisanal fishermen.
On Thursday, May 4, 2017, a taskforce set up by the Ministry of Fisheries and Aquaculture arrested over 100 fishermen who were engaged in light fishing, a practice that had long been banned by the West African country.
The arrests were made in Prampram in the Greater Accra Region and Gomoa Nyanyano in the Central Region of the country.