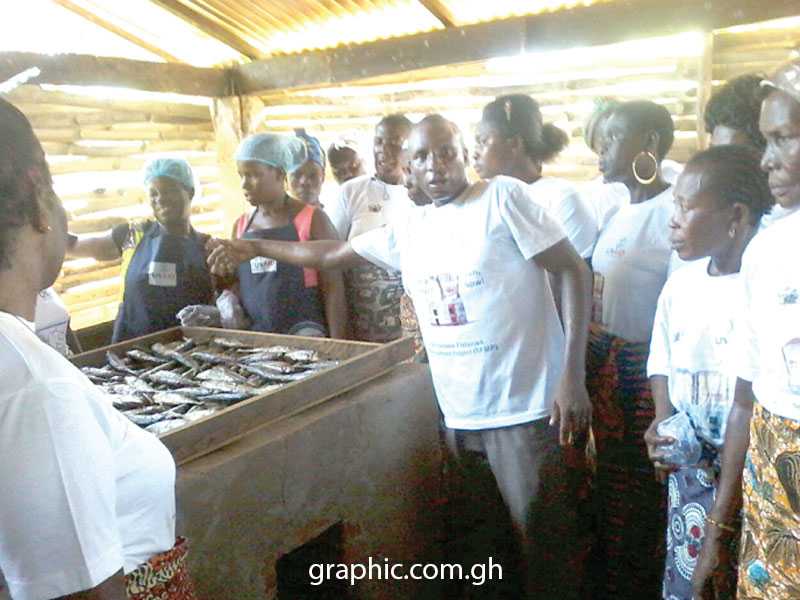 Fish processors and traders in the Central Region on Tuesday marched through the principal streets of Cape Coast to create awareness on the use of the new fish smoking technology known as the “Ahotor Oven”.

The walk was to sensitise the public on the benefits associated with the use of the ahotor oven and to encourage consumers to patronise fish smoked with the oven to safeguard their health.

The smokeless oven introduced by the Sustainable Fisheries Management Project (SFMP) in collaboration with Daasgift Quality Foundation, after a research by the Fish Research Institute (FRI) and approved by the Foods and Drugs Authority (FDA) and the Ghana Standard Authority (GSA). revealed that fish smoked with the new oven was healthier.

According to the research, the smoke components retained in fish smoked with the traditional oven was unhealthy and had long term effects on the health of consumers

The fishmongers held placards with inscriptions such as “Ahotor oven, quality fish, better health”, “Nam pa ma apowmudzen”, “Together we can bring change”, “buy quality fish and save more”, “buy fish smoked with ahotor Oven” among others.

It was facilitated by Central and Western Fishmongers Improvement Association (CEWEFIA ) under the SFMP with officials of the Food and Drugs Authority (FDA), Fisheries Commission (FC), Environmental Health Department participating.

It was on the theme “Improving fish processing through healthy handling and adoptation of improved fish smoking oven”.

Speaking in an interview with the Ghana News Agency (GNA), Mr Kwame Damoah, Mfantseman Zonal Director of the FC told fish consumers and the general public to purchase fish smoked with the new oven.

He encouraged fish processors to adopt the oven in view of its economic and health benefits.

Mr Damoah indicated that the Commission in collaboration with the Environmental Health Department will soon begin a programme to educate fishmongers and traders on the need to acquire health certificates.

This, he said had become necessary to help prevent the transfer of communicable diseases to consumers and again identify women with such diseases and refer them for treatment.

Madam Naa Korkor Ewudzie of the Food and Drugs Authority stressed the need for the fish processors to produce value added fish products that were hygienically packaged and safe for human consumption.

She said it was imperative that the packaging, storage and preservation of their fishery products met the required standards.

Mrs Victoria Koomson, Executive Director of CEWEFIA said Ghana and the rest of the World were recording a lot of chronic diseases mainly due to the kind of food consumed.

She encouraged the women to know and prevent the dangers associated with being exposed to smoke and stop using the traditional fish smoking oven which exposed them and their consumers to health hazards.

Mr Divine Abokye, an officer from the Environmental Health Department admonished the women to keep clean environment and adopt hygienic smoking and processing methods to add value to the fish they produce.

Some of the women who have been using the ahotor oven shared their experiences with the GNA saying their health and businesses have improved.