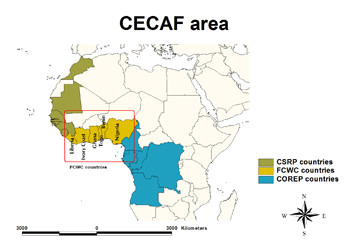 Current status of our resources

The sub-region is not particularly rich in fisheries resources compared to the northern  part of the Fisheries Committee for the Eastern Central Atlantic (CECAF) or the zone under the influence of the Benguela current in the south. However, the fisheries resources comprise major pelagic species (mainly sardines, anchovy, Spanish mackerel and chestnut bur); large pelagic like tuna fish; the demersal species, the mollusc and the shellfish (generally the “pénéidée” shrimps). Some pelagic stocks are shared by all the countries (for example the tunas) or by some countries. The Spanish sardines for instance are shared by all the countries except Liberia. The abundance of small pelagic species varies from year to year and depends among others on the intensity of the seasonal coastal upwelling which occurs in certain parts of the region. The demersal resources seem to be localized, but they gather in the same way throughout the sub region.

The fisheries resources of the sub-region are exploited by artisanal, semi-industrial and industrial fleets. In general, the fisheries sector provides a major source of employment and foreign currency since most of the tunas and shellfish are exported. The total landings of fish captured by countries in the sub-region have gone up by less than 115,000 tonnes in 1960 to over 1,000,000 tonnes in 2003, while the aquacultural production during the same period was approximately 34,000 tonnes, the large part of the production coming from Nigeria. The sub-region nevertheless remains a net importer of fish and fishery products.

For a large part of this population, fish is the only source of animal protein. With regard to food, the sector is essential for the supply of protein in the region. The average consumption accounts for almost double the African average of 8.2 kg /year /inhabitant.

Present status of the management of resources

Fisheries management in the sub-region is done in the same way in all the six countries and mainly involves the regulation of the size of meshed nets, the granting of operating licence to vessels, the delimitation of fishing zones and surveillance which is generally limited to port inspections, except in Nigeria and Ghana where patrol ships are available. The free access to fishing zones is a familiar phenomenon in the case of artisanal fishing, while illegal, unreported and unregulated fishing is common to all fisheries activities. There are often cases of poaching from “foreign” vessels. Some policies relating to emerging issues are quite similar across the sub-region. The countries apply the principles of the FAO Code of Conduct on Responsible Fisheries, although they have not yet included these principles in their legislative frameworks.

The fisheries administrations in the countries of the West Central Gulf of Guinea region lack the human, physical and financial resources to effectively and efficiently carry out their commitments with regard to the management of fishery resources. The shortage of personnel and regulatory bodies undermines the application of the law in certain countries. In all the member countries of the Fisheries Committee for the West Central Gulf of Guinea, except Ghana which has a Ministry for Fisheries, the administration of fisheries is under the Ministry of Agriculture or Animal Production.

Fisheries governance gives rise to several problems notably socioeconomic, ecological and human. Many of these problems are common to all the member countries and require that coordinated efforts be made to exchange knowledge and information, improve management tools, strengthen monitoring, control and surveillance as well as the fight against illegal, unreported and unregulated fishing.

The various national studies carried out by the FAO through the Sustainable Livelihoods Programme in Fisheries (SMEPF), proves that the fisheries sector practically contributes between  3 and 5% of the national GDP, and up to 23% of the GDP of the primary sector in some countries.

The industrial sector contributes significantly to national revenue in some countries. However, it is not the largest employer or supplier of fish to domestic or regional markets. It is artisanal fishing (traditional and small-scale, often with small wooden boats) which meets these requirements. 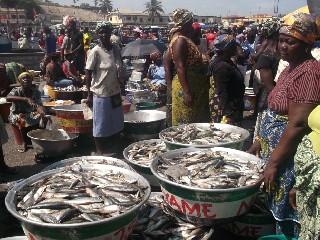 Women in West Africa often play a crucial role in various fishing activities, as in other sectors of the economy or industry.   In spite of this role, women are the most vulnerable group in the region together with children. They have the highest rate of illiteracy. Because of the seasonal nature of fishing in this region various methods of conservation of fishery products, such as drying, salting and smoking, mainly undertaken by women are very important. Women are also responsible for gathering inputs used for conservation as well as the sale of the products and often provide funding for the purchase of canoes or other equipment required for conducting fishing operations.

The fishing communities constitute one of the groups with a high risk of AIDS, due partly to their great mobility. It’s a serious threat to the communities, the trade and to food security. Understanding the phenomenon of migration in the communities of these fisher folk is an important tool in the fight against the spread of HIV/AIDS as well as the improvement in the situation of women.