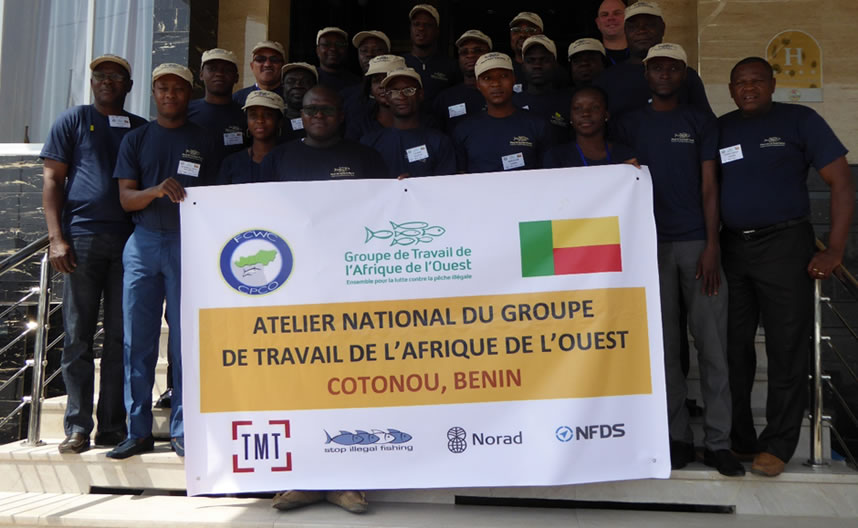 As part of the West Africa Task Force (WATF) initiative, the National Working Group (NWG) of Benin held its first workshop from 25 to 27 May 2016 in Cotonou, Benin. The event was organised in concert with the Fisheries Committee for the West Central Gulf of Guinea (FCWC) Secretariat in the framework of the project “Fisheries intelligence and Monitoring, Control and Surveillance (MCS) support in West Africa” with the technical support of Trygg Mat Tracking (TMT), Stop Illegal Fishing, NFDS and funding from Norad.

The opening ceremony was presided by Mr. Toko Abdoulaye, Secretary General of the Ministry of Agriculture, Livestock and Fisheries of Benin, with the programme being welcomed by the Beninese fisheries stakeholders invited for the occasion. It was highlighted that this inter-agency workshop to build national cooperation and capacity for the fight against illegal, unreported and unregulated (IUU) fishing was of paramount importance for Benin. Dr. Antoine Djihinto, the country’s Fisheries Director, indicated that “Benin marine waters offer economic potential to fishermen but these waters are now, like other West African waters, the target of an organised seabed looting, which jeopardises the people food security whose nutritional balance depends very much.” He also added that given the seriousness of this scourge which is now considered as part of environmental crime, the fisheries sector administration only cannot ensure an effective monitoring, control and surveillance system, there is a need for working with partner agencies for appropriate solutions.
The workshop began with a review of the objectives and activities of the West Africa Task Force at the regional and national level, including the goal to develop strong inter-agency MCS cooperation. Participants then identified the common violations, as well as the operational and legal challenges facing the monitoring, control and surveillance of the various fisheries sectors in Benin.  Following this exercise, concerns and needs relating to strengthening inter-agency cooperation were explored. Mr Brito Urbain, the Head of sanitary control of fisheries products, noted the absence of inter-agency synergy and a formal cooperation agreement, as well as the absence of means and mechanisms to carry out investigations in order to curb IUU fishing. Mr Duncan Copeland, Chief Analyst of TMT and technical advisor to the West Africa Task Force, noted that effective fisheries intelligence sharing and analysis, and inter-agency cooperation are key factors in identifying illegal operators and will be key to Benin’s capacity in reducing the rate of illegal fishing in Benin.
The participants then identified those agencies in Benin that have a “front-line” role in MCS, and will be lead partners in the implementation of the National Working Group, including participation on the West Africa Task Force regional communications platform. A session was then held on a particular fisheries control concern for Benin that requires inter-agency cooperation, namely the activities of reefers in Benin waters and the imports for fish through Cotonou port. Building on this discussion, the final day of the workshop concluded with an inspection simulation at the fishing port of Cotonou with a practical exercise on an offloading reefer. 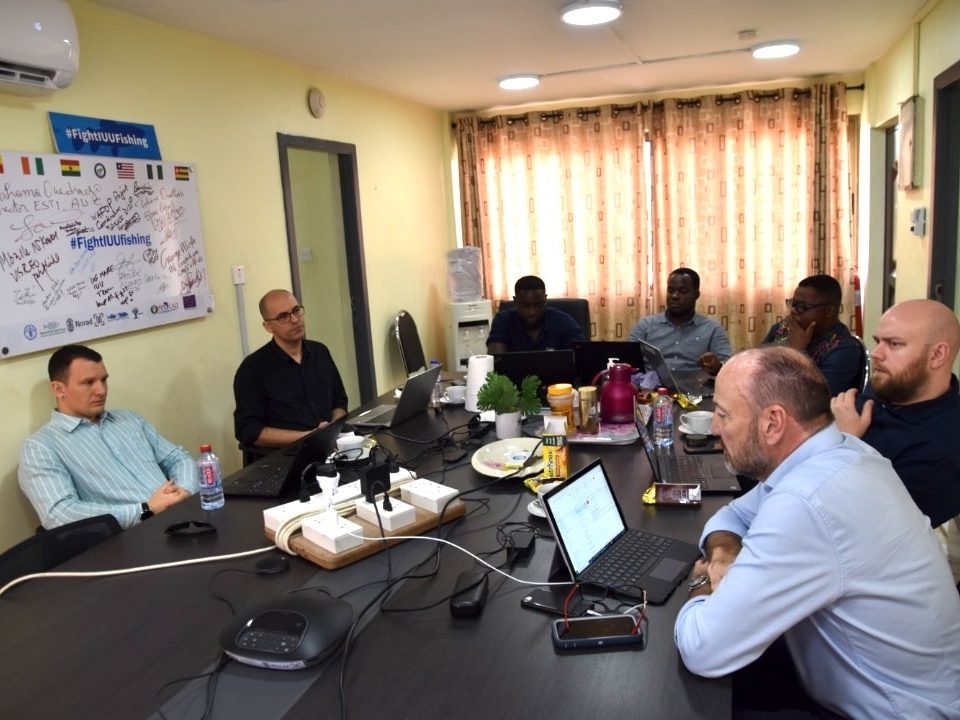 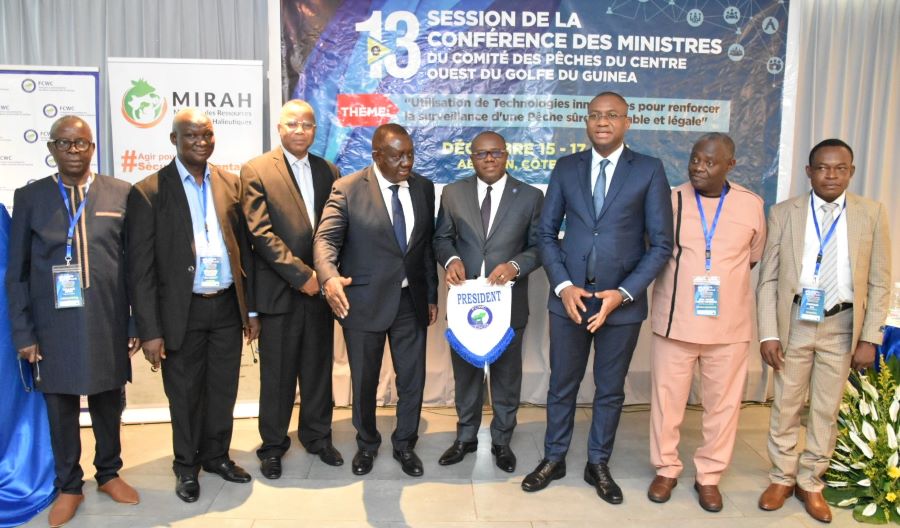 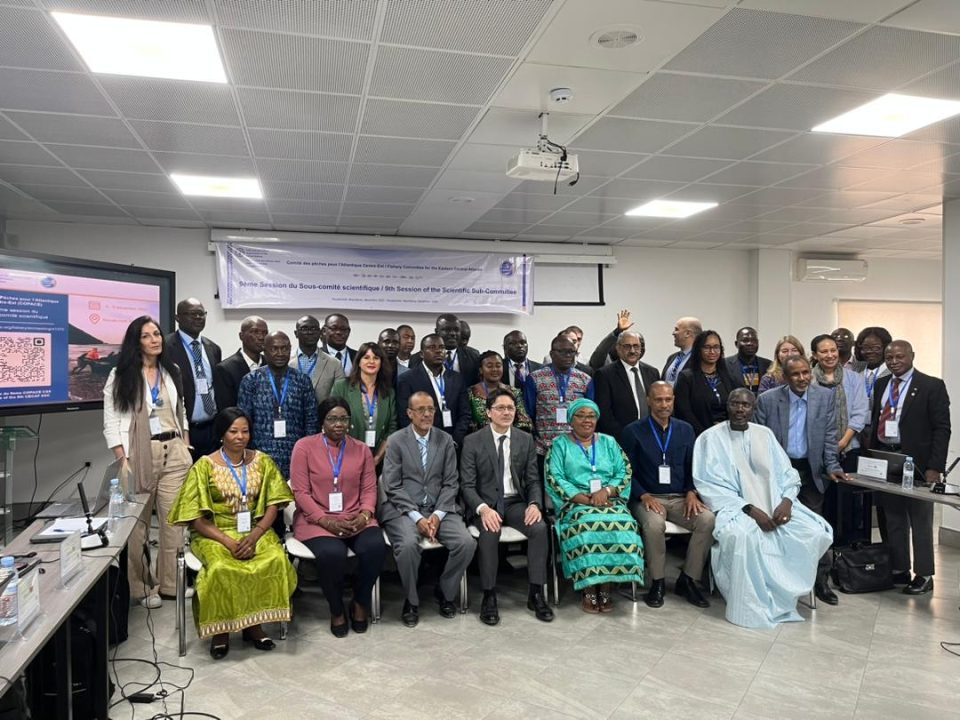