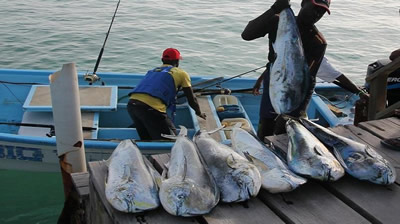 Chinese collaboration with an UNCTAD fisheries project means that as well as helping developing countries to export more fish, the UN agency may also be advancing South-south cooperation

Over the past year, an UNCTAD project – “Building the capacities of selected least developed countries to upgrade and diversify their fish exports” – has been training officials from a handful of countries in Africa and Asia, primarily on international food safety and sanitary standards.

And this week, in collaboration with UNCTAD, the Freshwater Fisheries Research Center at the Chinese Academy of Fishery Sciences will begin intensive training with participants from Cambodia, Mozambique and Myanmar. The participants will learn about conforming to the constantly shifting regulations on fish trade in order to export more fish.

“China is the world’s largest exporter of fish, by far, so they have great experience,” said Ben McCarthy, an associate economic affairs officer from UNCTAD.

“This has been a good way to facilitate south-south cooperation and accelerate an effective exchange of knowledge between countries,” he said.

Developing countries now account for more than half of all fish exports by value. Fish is already one of the world’s most traded food commodities, and as the global population grows to an expected 9.7 billion people by 2050, this demand for fish is also expected to increase, providing valuable opportunity for trade.

Goal 14, to conserve and sustainably use the oceans, seas and marine resources for sustainable development, means that aquaculture will make up an ever larger share of future demand. The UNCTAD project will also facilitate access to marine resources and markets by small-scale and artisanal fishers.

In the fish export sector as with other trade sectors, this access is often impeded by non-tariff barriers. The UNCTAD and Chinese training supports countries and local stakeholders to overcome these obstacles and to trade more fish, both farmed and wild.