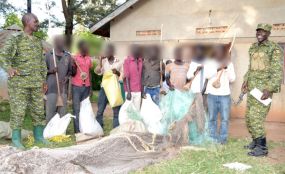 Kalangala — In January, President Museveni instituted a special Fisheries Protection Unit (FPU) to fight illegal fishing on all major lakes in the country to end the vice that was reaching crisis proportions.

The President’s action was prompted by a petition from a team of fishermen from Kalangala islands, who had accused operatives charged with fighting illegal fishing of selling immature fish to the Allied Democratic Forces (ADF) rebels in eastern DR Congo.
Indeed, the indiscriminate fishing had generally placed immerse pressure on the fish varieties and threatening their extinction on some lakes. But the anti-illegal fishing crack unit headed by Maj James Nuwagaba, is also producing unintended consequences as the army steps up its patrols of the lakes, forcing fishermen to flee the islands and lake shores as revenues also drop.
The FPU was, among other things, mandated to wipe out all illegal fishing gear, bar illegal fish dealers from transporting immature fish to DR Congo and to educate fishing communities on the effects of illegal fishing.
But six months down the road, the operations conducted by soldiers under FPU have registered some mixed results on Kalangala island district.
Maj Nuwagaba says his team has so far collected illegal fishing gear worth Shs2b, although many unscrupulous fishermen are still in possession of illegal fishing material stashed away in their houses.
“This special fisheries unit is here to stay, we want a clean lake and we shall make sure no one engages in illegal fishing anymore. That is the vision of the Head of State, which we must fulfill,” Maj Nuwagaba said in an interview last week.
Daily Monitor has also reliably learnt that hundreds of fishermen, who have in the past two decades been operating around the 84 islands that make up Kalangala District, have also deserted the area as the crackdown on illegal fishing intensifies in the island district.
According to the district fisheries department, 60 per cent of the fishermen who used to operate at different major landing sites, including Kasekulo, Mulabana, Lujaabwa, Nkose, Kitobo, Kachanga, Mirindi, Kyeseerwa, Nakibanga, Nkese and Kisaba, have migrated to the nearby Ziiru Landing Site on Buvuma and Misoma islands in Tanzania in quest for fish species.
“These days, the landing sites have been abandoned and we are not even getting tax remittances from those areas because of the ongoing operations against illegal fishing. Landing sites that used to be home to 4,000 people currently have less than 1,200 people,” Tadeo Mwesige, the district production secretary, said during an interview with this newspaper last Friday.
The residents blame the exodus on brutality and high-handedness of the soldiers tasked with controlling illegal fishing. They accuse the soldiers of being used by high profile individuals in government to chase away poor fishermen from some landing sites in order to set up private business investments under the guise of fighting illegal fishing on the lake.
But Maj Nuwagaba vehemently denies the allegations.
“Mzee (President Museveni) is the one who sent us here. There is no one above him and it is not true that there are big people in government supporting illegal fishing as some fishermen have always claimed,” he said.
Fishermen speak out
William Muteekanga, one of those who have for long engaged in illegal fishing, says he was forced to relocate from Mirindi to Ziiru Landing Site on Buvuma Island after learning that he could no longer sustain his business in Kalangala.
“I went with all the people I used to work with since we had nowhere to put our illegal fishing gear so we left Kalangala District,” Mutekanga says.
Ismail Mayanja, a Beach Management Unit chairperson at Mwena Landing Site, says the FPU officers confiscated a lot of illegal fishing gear and arrested scores of fishermen during the launch of the crackdown.
“Most of the fishermen handed in their illegal fishing materials voluntarily, while those who refused were arrested and arraigned before courts of law and later penalised. Some have been handed a three-year jail term. This scared people and many fled,” Mayanja says.
But John Ekudel, the Kalangala District senior finance officer, also says the operations against illegal fishing have led to a shortfall in the district revenue collection since many fishermen fled in fear of being arrested for engaging in illegal fishing.
“Today, you can visit a landing site and find no people. We used to collect parking fees from several boat operators, but we can no longer get it,” Mr Ekudel says
Kalangala District used to collect up to Shs200 million every year from boat parking fees and licences alone.
“By May 31, the district had only collected Shs83 million, which is far below what was collected in the previous years,” he added.
Recently, Agriculture, Animal Industry and Fisheries minister Vincent Ssempijja ordered the closure of all ungazetted landing sites in the Masaka Sub-region, saying the people there were frustrating government efforts in fighting illegal fishing in the area.
Mr Ssempijja said whereas government has done its best to stop illegal fishing in the area, fishermen operating at un-gazetted landing sites had stubbornly refused to stop the vice.
Kalangala District chairperson Willy Lugoloobi says many people were engaging in illegal fishing because they couldn’t afford the recommended fishing gear and asked government to help the fishermen acquire legal fishing nets through the Operation Wealth Creation programme.
Effects of illegal fishing gear

Livelihood source. Some 30 million people in East Africa depend on Lake Victoria for their livelihoods but the continued use of illegal fishing gear is also seriously hurting the lake.
Conservationists warn that if catching immature fish is not checked, Lake Victoria will have its key fish stock depleted in the next 30 years and people around will have to find other means of survival.
Reduced fish stock. Illegal fishing on Ugandan lakes has already caused a reduction in fish stock, especially in species like tilapia, Nile perch, and silver fish; something that has adversely affected the country’s export earnings from fish.
Loss of jobs. Ten years ago, a total of 21 fish processing factories were operating, but only eight are currently in business, while others are struggling to stay afloat because they operate at only 20 to 30 per cent capacity because of the dwindling fish stock.
Voices

“Instead of providing coffee and maize seedlings to people in Kalangala, let government provide legal fishing nets to help our people continue with their business,” Willy Lugoloobi, Kalangala District chairperson.
“This special fisheries unit is here to stay, we want a clean lake and we shall make sure no one engages in illegal fishing anymore. That is the vision of the Head of State, which we must fulfill,” Maj James Nuwagaba, Fisheries Protection Unit boss.