Security at the Nigeria Atlantic coast 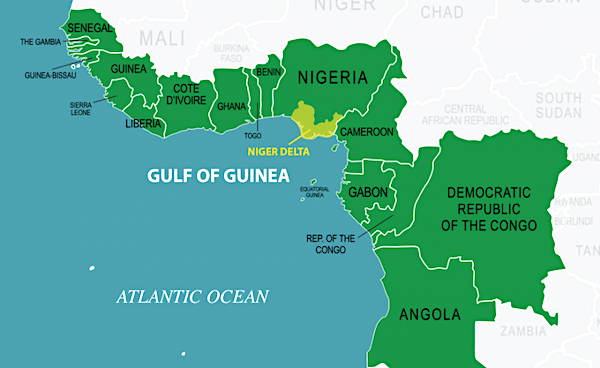 Piracy is a major security concern in the Gulf of Guinea affecting the flow of commerce in an ecosystem bordering a number of countries in West Africa with the natural contagious domino effect on the wider international community. In the last decade, it had become an issue of global relevance. Brazenly, pirates in the Gulf of Guinea often part of heavily armed criminal enterprises, employ violent methods to steal oil cargo, hold ship crews in exchange for extortion and ransom.

In 2012, the International Maritime Bureau, Oceans Beyond Piracy and the Maritime Piracy Humanitarian Response Program jointly reported that the number of vessels attacks by West African pirates reached a world high, with 966 seafarers attacked during the year. According to the Control Risk Group, pirate attacks in the Gulf of Guinea had toward the end of 2013 maintained a steady level of around 100 attempted hijackings in the year, a close second behind South East Asia. In total, 1,726 seafarers were affected by piracy and armed robbery in 2017 in West African waters as a whole, compared to the 1,921 the year before. The International Maritime Bureau in a sign of worsening trend said130 seafarers were kidnapped in 22 separate incidents in the Gulf of Guinea in 2020, eclipsing the 2019 record of 121 kidnappings.

The Nigerian navy estimated there have been ten to 15 attacks every month in recent years, and that the monthly tally can rise as high as 50. In contrast, the International Maritime Organization (IMO) has recorded about 50 successful attacks annually for the entire region in recent years. The International Maritime Bureau (IMB), however, concedes that the real number of pirate attacks is at least twice as high as the official figure of 129. Allowing for 100 successful attacks per year would loosely fit both the IMO’s and the Navy’s estimates, particularly if the overall rate has declined slightly with the militant demobilization. As noted above, about three-quarters of these attacks are simple robberies, netting very little for the pirates. According to a recent research data, the amounts acquired were valued at between US$10,000 to US$15,000 per attack. It is unlikely the robbers actually realized all this value, but if they did, they would have collectively gained as much as US$1.3 million annually in recent years.

As piracy in the Gulf of Guinea continues to be a concern to the shipping industry, governments in the region with limited capacity generally highlight that the fight against piracy requires a lot of investment and coordinated effort. Much of the piracy that affects West Africa is a product of the disorder that surrounds the regional oil industry. A large share of most recent piracy attacks targeted vessels carrying petroleum products. These vessels are attacked because there is a booming black market for fuel in the region. Without this ready market, there would be little point in attacking these vessels. There are little indications the oil may also be smuggled outside the region.

Like piracy, illegal, unreported and unregulated fishing is rampant, overwhelming in an area conspicuously exhibiting signs of insecurity challenges, lack of development and scanty governance. It was therefore not surprising the European Commission identified Illegal Unreported and Unregulated fishing as a key risk for its strategic purposes in the Gulf of Guinea. Some think the presence and predominance of foreign fishing fleets in the Gulf of Guinea is endemic of a vacuum created by the inadequacy of governments in the region. Despite ongoing overexploitation concerns, the Gulf of Guinea continues to be a strategically important fishing ground for European fleets. The existence of bilateral fisheries agreements, mostly short term, self serving between the EU and Cape Verde, Cote D’Ivoire, Gabon, Sao Tome & Principe and Mauritania speak for themselves.

In an important recent article by Ioannis Chapsos of the Centre for Peace and Reconciliation Studies, he highlighted the importance of the Gulf of Guinea as a source of oil and gas for the EU, particularly in the light of continuing tensions with the Russian Federation (currently Europe’s key energy supplier).

This would explain the European Union’s concerted effort to understand and address insecurity issues in the Gulf. It’s however crucial to put this into perspective as the EU interest is not necessarily mutually inclusive with that of the countries in the region. What is interesting is that IUU fishing is being given such relevance in the context of European objectives. Perhaps this is a sign of the EU’s recognition that illegal fishing has a powerful destabilizing potential. It can derail fledgling coastal development and resilience initiatives as well as persistently undermine attempts at sustainability in the fishing industry itself.

Implementation efforts by the Gulf of Guinea Commission, ECCAS and ECOWAS concerning their ‘Code of Conduct Concerning the Repression of Piracy, Armed Robbery Against Ships and Illicit Activity in West and Central Africa’ will no doubt be key to future EU strategy development and outcomes.

Development of a Nigerian blue Economy initiative would serve as a catalyst for re-engineering  the region’s economic outlook and value as emerging market that would raise expectations despite the persistent risks. The enormous resource required to adequately manage and supervise this vast ocean in the short to mid term might be too much for the Nigerian state to bear hence a proactive engagement with neighboring countries and the EU on existing Protocol would be a short term solution that could ensure the interdiction of both the local and international criminals engaged in both piracy and illegal unreported and unregulated fishing in the Nigeria Atlantic Coast.