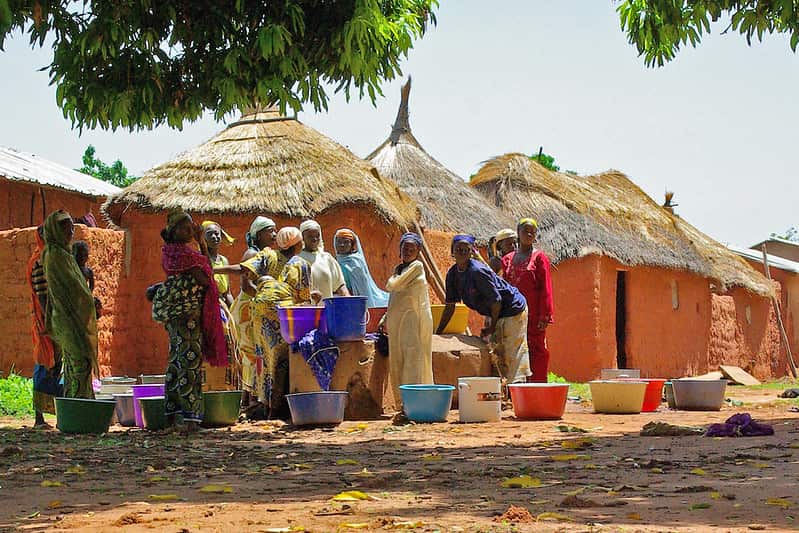 More than 25 million residents in Abuja, Lagos, and Ogun states were put under federal lockdown on March 30th which was later extended to April 14th. Other states were put under partial-lockdown and introduced their own restrictions including a ban on large gatherings and events. On April 28th, new nationwide measures were introduced including a night-time curfew, mandatory wearing of facemasks and a ban on non-essential travel between different regions. It was announced that the lockdown would be relaxed from May 4th.  By the beginning of May, Nigeria had registered 2170 confirmed COVID-19 cases and 68 deaths.

According to the World Bank, Sub-Saharan Africa is predicted to go into recession for the first time in 25 years due to coronavirus economic impacts and daily wage workers in Nigeria have already been hit hard by lockdown measures. The UN identified Nigeria as one of the most acute hunger risk countries due to global disruptions and lockdowns. The official 6 p.m. to 6 a.m. curfew was reportedly not respected as traders and businesses complained of a lack of policies to help mitigate the economic impacts of such measures. In Kaduna state, citizens were given two days per week to re-stock on food. Markets lacking sufficient space to allow social distancing were closed, while others remained open for essential food goods only. In Ilorin, Kwara state, a four-hour window was set up three days a week for citizens to get essential goods.

Prices of staple foods including rice, beans, and garri are reported to have increased in several states,  including  Imo and Cross River state, reportedly due to closure of roads and borders. Traders were said to be prevented from getting new merchandise or buying goods in large quantities, resulting in the inflation of prices for their remaining stock. Some traders were also suspected of taking advantage of this unstable situation to make more profit. Market closures heightened fears of food scarcity, which was claimed by some to have the potential to kill more people than the virus itself. In Lagos, the epicentre of the outbreak, informal workers lamented their income insecurity and expressed fears over providing enough food for their families in the near future. Social distancing in Lagos and Oyo states proved to be very difficult in several overcrowded slums. Sixty-nine percent of Nigeria’s urban residents are reported to live in  slum conditions where most people lack access to safe drinking water, making sanitation and hygiene measures hard to follow.

Impacts on fisheries and aquaculture: In Cross River state markets, fish and crayfish were reported to be sold twice their regular price. In Kwara state, fish farmers were under pressure following a total lockdown on movement, preventing them from accessing and tending to their farms. This situation prompted fish farmers and traders to request an exemption from the lockdown. On the other hand, it has been suggested that the COVID-19 crisis may act as a catalyst to spur aquaculture investments in Sub-Saharan African countries such as Nigeria, enabling them to reduce dependence on fish imports.

Responses and adaptations: The Kaduna, the state government the is reported to have introduced food procurement and distribution to the most vulnerable. In Lagos, the state administration announced that it would deliver food to 200,000 homes. Nigeria’s vice president has announced a grant of $25 million to Lagos, and the country’s humanitarian minister announced that cash transfers were being paid to the poorest households. It was also said private donators such as such as Africa’s richest man Aliko Dangote and corporations have donated millions of dollars. Despite these measures, relief was reported to be delivered unequally, or not at all, in Imo state and Ikorodu, a low-income community on the outskirts of Lagos.