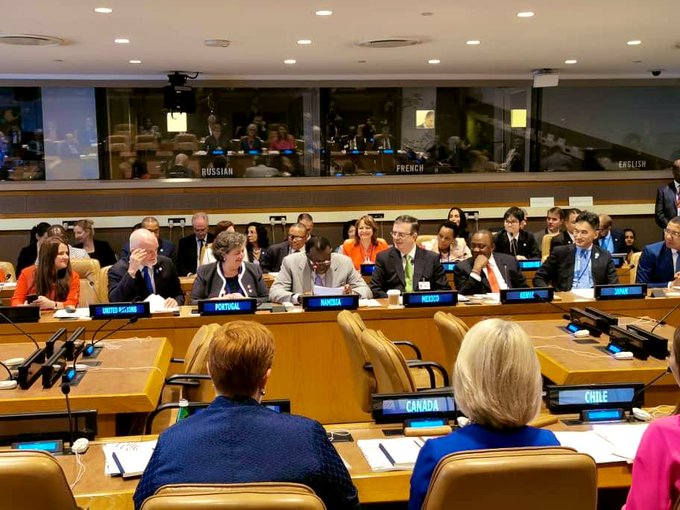 Namibia on Monday pledged $2.7 million to increase the fight against illegal, unregulated and unreported fishing.
Namibian President Hage Geingob made the announcement as he shared his nation’s commitments during a call for ocean-based climate action at the UN General Assembly.
Namibia also committed an extra $5 million towards ocean research and protection during the 2019/2020 financial year. Out of that, $2.3 million has been set aside to facilitate research on oceans, especially on fisheries stocks and the marine ecosystem.
IUU fishing undermines national and regional efforts to conserve and manage fish stocks, according to the Food and Agricultural Organisation.
Estimates by the United States and the European Union show that illegal fishing accounts for nearly $23 billion worth of seafood yearly.
The United Nations has previously warned that fishing communities along the African coastline risk extinction due to illegal fishing and other factors such as mining and pollution.
In 2018, the FAO and Namibia signed an agreement to receive assistance to enhance their capacity to implement the Port State Measures Agreement. The agreement compels countries to eliminate, deter and prevent illegal unregulated and unreported fishing.
President Geingob also disclosed that Namibia is in the final stages of the ratification of Annex 6 of the MARPOL Convention (Convention on the Prevention of Pollution from Ships). This also includes a 50 percent reduction in greenhouse gasses emissions from ships by 2050, in line with the International Maritime Organisation Agreement.
President Geingob added that Namibia, Angola and South Africa and development partners committed $3.8 million for maritime research activities under the Benguela Current Convention (BCC) for the 2019/2020 financial year.
Namibia also committed to ensuring that at least 10 percent of its Exclusive Economic Zone is gazetted as a marine protected area by next year.