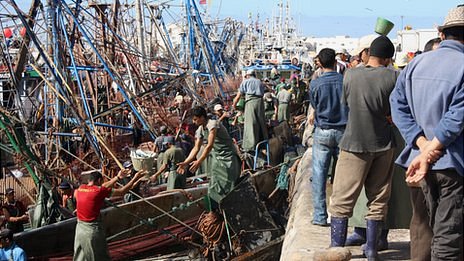 Across the sea to the south, the end of a 98km (61 mile) conveyor belt is just visible, delivering phosphate – a key ingredient in agricultural fertiliser – from an inland desert mine to cargo ships.

The fish and phosphate, along with possible reserves of oil and gas, underlie a territorial dispute in Western Sahara that has long been politically deadlocked.

The Moroccan government contends that they provide a basis for economic development, helping drag this desert region into the modern era.

But for Sahrawi activists who still dream of independence, these are the spoils of an illegal occupation that is partly sustained in order to allow further plundering of natural resources.

The argument has played out this week in the European Parliament in Strasbourg, where members voted down a fishing agreement between the European Union and Morocco amid objections that the deal was illegal.

Morocco seized control of most of Western Sahara in 1976, following the departure of the former colonial power, Spain.

It refers to the territory it controls as its “southern provinces”.

Officials in Laayoune, the largest city in the area, say it has been transformed from a “wasteland” dotted with destitute nomads to a network of towns connected to national transport, power and telephone grids.

“There is a road from Tangier to Senegal,” says Laayoune’s mayor, Moulay Hamdi Ould Errachid, reeling off evidence of investment in the region.

“There are schools, hospitals with specialist doctors, clean water, two desalination plants with a third on the way, a great port.”

Indeed, officials say the area has benefited from more investment than the rest of Morocco.

The authorities have declared Laayoune and Boujdour to be “cities free from shanty towns”, a declaration which though disputed, could not be made in Casablanca or other Moroccan cities further north.

Over the past 35 years, economic incentives have lured people from the north. These migrants, some of whom are ethnically Sahrawi, are now thought to outnumber indigenous inhabitants by as many as two to one.

Mr Ould Errachid, a Sahrawi dressed in traditional white and golden robes, says the split between indigenous people and settlers may be more even, whilst arguing that the influx was necessary for development.

“If we want to live just among Sahrawis, we would not have professors, doctors, pharmacists and engineers,” he said.

He added that a range of programmes were in place to boost the level of employment among Sahrawis, and secure jobs for them in the phosphate and fishing industries.

They complain of continuing social and economic discrimination.

“The Moroccan state uses pro-Moroccan Sahrawis, and they live in luxury of course,” says Lahbib Salhi, a 63-year-old former employee of Phosboucraa, the state phosphate company.

“They can’t do anything independently, so they act against the interests of indigenous citizens.”

He added that despite official claims to the contrary, “reality shows that Sahrawis are marginalised”.