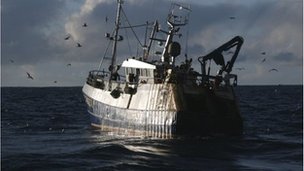 Morocco has ordered foreign fishing boats operating in its waters under an EU deal to leave immediately.

The moves comes after the European Parliament voted not to extend a deal under which the EU paid Morocco for access to its fish stocks.

MEPs said the deal was illegal as it did not benefit the people living in the disputed Western Sahara, off which most of the fishing took place.

The ministry said the parliament’s decision was “regrettable”.

In a statement, it said the move could have “serious consequences for co-operation between Morocco and the European Union in fishing”.

The EU – Morocco’s largest trading partner – had been paying 36m euros (£30m: $47m) a year to Morocco for the right to fish in its waters, primarily off the coast of Western Sahara.

The deal officially expired in February, and the EU wanted it to be renewed up until February next year.

But on Wednesday, MEPs using powers granted under the Lisbon Treaty voted 326 to 296 to block the renewal, saying there was not enough evidence to show the deal would benefit the Sahrawi population, who live in Western Sahara.

Critics of the deal also said it was a waste of public funds and led to over-fishing.

Morocco annexed Western Sahara in 1976 but its claims of sovereignty have not been internationally recognised.

The separatist Polisario movement fought a guerrilla war against Moroccan troops until 1991 and still seeks to be recognised as an independent state.

The European Parliament said a new deal should be negotiated which does more to take the Western Sahara issue into account.