Madagascar rocked by fishing deal that never was 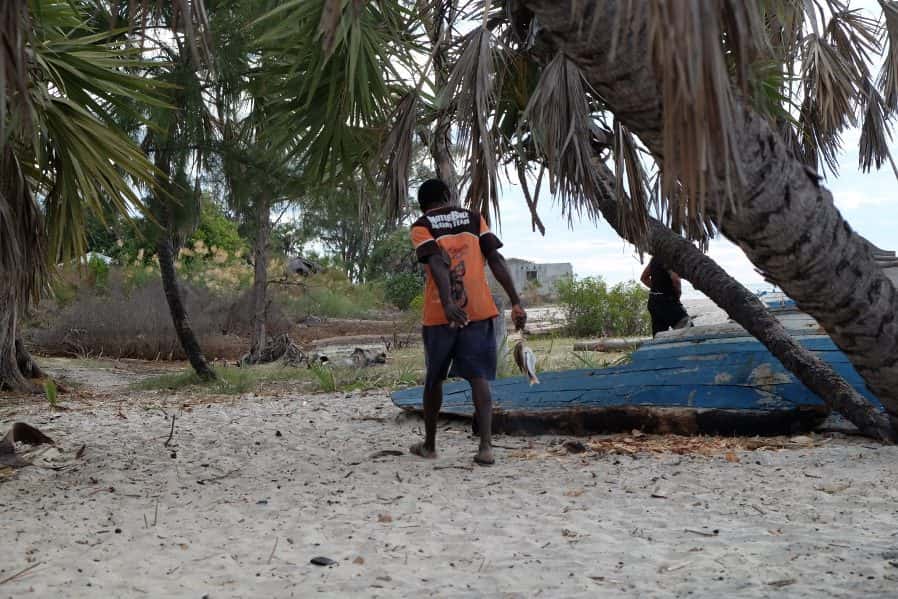 A US$2.7 billion fishing deal with China appeared from nowhere – then disappeared

It’s almost three in the afternoon, and 86-year-old Sikina becomes friendlier when she sees her two sons approach on their little wooden boat. A minute ago she was waving away my camera. Now she says I can interview her if I buy her a bottle of beer. But don’t bother her sons, she warns me, they haven’t eaten since setting off fishing at 4am.Her sons are twins, in their fifties. They bring their boat in to dock and waste no time in rinsing their catch and preparing a meal. The family of three don’t have much food for the day: one large fish weighing less than a kilogram, three smaller fish, and an eel. A normal catch in this fishing village – enough to eat, not enough to sell.

Sikina is hungry. She watches as her sons prepare the meal, telling me that when she married into the village 50 years ago the boats came back with 150kg of fish.

This is a small fishing village on the western coast of Madagascar, just across the bay from the port city of Mahajanga. Head west from here, and you reach mainland Africa. Madagascar, Africa’s largest island, split from the Indian subcontinent 80 odd million years ago. It is a paradise of natural resources and biodiversity. At 580,000 km2, it can be easy to forget it is an island.

Amir, Sikina’s neighbour, is fixing his boat nearby and can’t help but laugh when he hears what she says. He tells me she’s joking. The best catches he recalls were ten years ago – 30-40kg a trip. Now it’s normal to catch only 2kg in an entire day. I asked Sikina what she would do if there were no more fish. She stood up and shook her head as she chased me off to buy her beer, saying that could never happen. Hearing this, Amir’s young wife, playing with her daughter, shook her head at me, saying fishing was becoming less reliable and they were preparing to move and look for new opportunities.

This was in August 2019, when I’d visited the village to learn about an ambitious new fishing deal. A year earlier, a “blue economy” deal had been signed in Beijing, which would have seen investment of US$2.7 billion (about 19 billion yuan). Madagascar is one of the world’s poorest nations, with 75% of the population living on less than US$1.90 a day. Before visiting the village, I met with someone who outlined the deal to me. He pointed out that Madagascar’s GDP in 2017 was only US$11.5 billion, making a US$2.7 billion investment hugely important, and that Mahajanga would be one of the trial investment sites. One of the promises made was that there would be fishing work for people like Amir and the twins.

But that trial, and the whole investment plan, turned out to be a mirage.

‘The Chinese are coming’

Go back a year. On 3-4 September 2018, the Forum on China-Africa Cooperation was held in Beijing. Having first taken place in 2000, the forum is held every three years, attended by China, all African nations which have diplomatic relations with China, and various African organisations. After the two-day summit, it is usual for the media to report on big deals signed between Chinese and African firms – big investment deals, signed under a banner of “win-win cooperation” as heads of state look on, have always been a feature of the forums.

The 2018 forum was particularly successful: railways in Sudan, a business district in Egypt’s new capital, mining in South Africa, a basket of marine projects in Guinea, finance underwriting in Ghana. And on 5 September, in bustling Beijing, another deal was signed on the fringes of the forum: the Madagascar “blue economy” deal.

The news reached Madagascar the following day, 6 September. Articles were accompanied by a photo of the signing: officials from both sides, suited and booted, national flags on the table, clutching copies of the agreement as they shook hands for the cameras. For Madagascar, Hugues Ratsiferana, head of the Madagascan Agency for Economic Development and Business Promotion (AMDP); for China, Mao Jinrong, owner of a 99% stake in Taihe Century Investment Developments. And in the back row, Hery Rajaonarimampianina, at the time president of Madagascar.

On 7 September, the Midi Madagasikara newspaper had more details: “US$2.7 billion of investment over 10 years”, “directly creating at least 10,000 jobs”, “first three-year stage to start late 2018”, “the first inshore fishing firm will have a fleet of 330 boats.” And there was a quote from the president: “For our Chinese partners, this framework agreement is part of a global initiative, bringing the new silk road to Madagascar.”

Joelison Razakarivony, project official with Madagascan NGO Alliance Voahary Gasy (or Nature Alliance), read the news that day and called a colleague in a panic: US$2.7 billion? Three hundred and thirty fishing boats? This would be the biggest ever investment in Madagascar’s fishing sector.

Razakarivony soon realised that almost all of the civil society bodies working in Madagascar’s fishing sector, and even the government’s own environment ministry, had learned of the deal from the media. It even emerged that the fishing ministry had not been consulted prior to the deal being signed. On 5 October, Augustin Andriamananoro, fisheries minister, confirmed this during a television interview, and spoke out against the deal: “If we are not careful, this will lead to over-exploitation of our ocean.”

Madagascar has a longer coastline (4,828km) than any other nation in Africa, and an exclusive economic zone of 1.22 million km2. Fishing, and in particular traditional fishing, is a crucial source of food and income for coastal communities. But conflict between traditional fishers and local or overseas fishing firms has worsened in recent years. Commercial fishing is a hugely sensitive topic.

Voices were soon raised in opposition to the deal. On 26 September 2018, the director of the WWF in Madagascar wrote in a newspaper comment piece that “not everything that happens on the ocean is ‘blue’”.

On 1 October, 25 NGOs issued a joint statement, saying: “The deal threatens 500,000 fishermen in Madagascar, along with marine ecosystems and life.”

That village across the bay from Mahajanga is called Katsepy, and it lies in rich fishing grounds. The Betsiboka river flows from the mountainous interior to enter the sea here in Bombetoka bay, which is home to the island’s largest mangrove forest. The 450km coral reef off Madagascar’s west coast has always provided good fishing.

The mangrove forest and the coral reef co-exist: the forest absorbs sediment carried into the sea by the river; the reef absorbs the power of the waves. Both provide habitats for marine animals. Sikina’s recollections of easier fishing half a century ago were no joke. Since industrialised fishing started here in the 1960s, coastal fishing has seen huge changes.

The tools of traditional fishing have not changed. The local boats are known as lakana, or pirogues in French, and have been used since the Austronesian people landed here 1,500 years ago. They are long narrow canoes made from a single tree trunk – with an outrigger to make distant-water fishing possible.

Not all fishermen can afford one. A lakana costs around US$1,400, then there are nets and ice to buy. So some more business-minded fishermen put their own small fleets together. Andriantsifenana Honore Jonah, 35, started fishing when he was 20. Now he has three traditional lakana and four with motors. Six or seven people work his boats, and he takes 70% of any catch.

He has the boats sail three or four days south, to avoid the other fishermen around the port and reach less-depleted fish populations. A week’s fishing in those quieter waters can net 500kg, 80% of which gets sold to fish processors in the port, mostly for export to Europe and Asia. Madagascar doesn’t consume much itself, exporting 80% of its seafood.

The fishermen working for Jonah often run into industrial fishing fleets when they are out. They are particularly visible at night, as they are brightly lit. But they don’t know what fish they are catching, if they are working illegally, or where they have come from and where they are heading.

Jonah heard about the Chinese deal from a friend. He cannot imagine what US$2.7 billion or over 300 more boats would mean. His fishermen get anxious when they see two or three boats of unknown origin.

“Will there be any fish left in five years?” he ask….. Continue reading