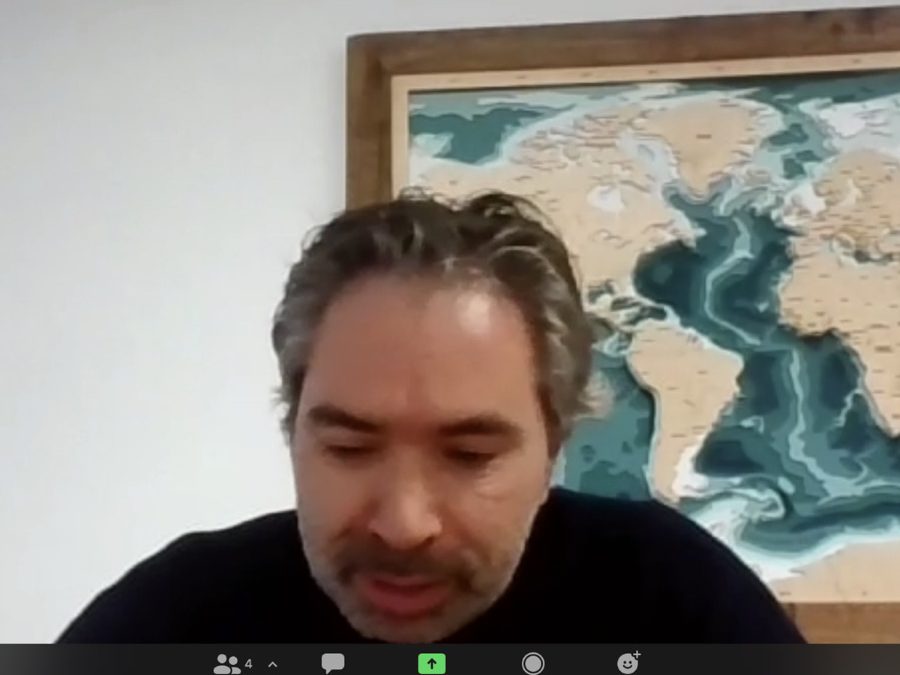 Cargo ships from around the world are moving untracked in African waters, where the rise of a new fishing activity affects everything from local biodiversity to piracy.

The Veracruz shouldn’t simply disappear. This is no small fishing boat but a 108m-long, 3,755 gross tonnage, refrigerated cargo ship built in 1977. Yet every time it crosses the sea border from Namibia to Angola it seems to do exactly that, as its operators switch off the automatic identification system (AIS) tracking signal. ‘Going dark’ contravenes the international treaty for Safety of Life At Sea (SOLAS) rules for ships like this of over 300 gross tonnage.

In addition, the Veracruz showed the typical signs to engage in fish transshipping, receiving catches from local fishing vessels. This ‘transshipment’ practice, transferring catches from small fishing boats to larger refrigerated carriers or ‘reefers’, seems harmless enough on the surface but when it’s done clandestinely, unmonitored and unregulated, it may contribute to loss of biodiversity, over-fishing, seafood fraud, even human rights violations and piracy.

Europe’s involvement in the flourishing fish transshipment business of West Africa has been growing, with European-owned reefers behaving suspiciously at sea. Greenpeace’s findings point in the same direction as E&T’s findings. Some operate legally; others may not. Either way, European owners take advantage of poor oversight in the region, where authorities appear powerless to control transshipping. Europe then benefits at the expense of some of the poorest nations in the world, including Angola.

West Africa is a hotspot for what is known in the industry as illegal, unreported, and unregulated (IUU) fishing. The UN’s Food and Agriculture Organization says IUU fishing and transshipping are tightly connected, and West African nations lose $2.3bn each year to it.

Insiders tell E&T how the fish transhipment business work. Refrigerated cargo transport vessels rendezvous at an arranged time and location, say those in the business, sometimes to just exchange supplies or crew members. But when they transfer catch from a fishing boat, the frozen fish often end up in Europe, sometimes labelled as a species they’re not.

Cargo vessels ship large quantities of fish over thousands of miles from Sierra Leone, Liberia and Ghana, Mauritania, Angola or Guinea, to foreign markets. Such practices can affect fish stocks that are also affected by climate change and warmer seawater, and leave local fishers short of catch for the home market. Across West Africa, 37 species are now classed as ‘threatened with extinction’. Between Angola and Mauritania, 14 others are nearly threatened, according to the International Union for the Conservation of Nature (IUCN). In Angola’s exclusive economic zone species like the Cunene horse mackerel have been disappearing.

The analysis suggests that little has changed for those operators over the past three years, as the volume of encounters has remained stable. They are still turning off their AIS tracking. So why do they go dark?

Hans Mol is managing director of the European fishing cargo firm GreenSea Chartering, a company that is owned 50 per cent by Seatrade, has previously been fined for violating transshipping rules. It helps clients, among other things, to “send vessels pro-actively to meet [client’s] fishing vessels at the fishing grounds so they don’t waste any time going back and forth between ports”, according to its website. The firm maintains a large fleet: 38 ships are listed on its website. Mol told E&T his fleet is involved in fish transshipping in the Gulf of Guinea and the ships turn off AIS transponders in West Africa because of the rising threat of piracy.

“There is a constant dialogue whether to turn off our AIS signal. Do you want to be visible for the pirates? The Gulf of Guinea is where we sometimes switch it off. Our first attack and kidnapping was in 2012”, he says. That was the Breiz Klipper off Nigeria.

West Africa has become a world hotspot for pirates, taking over from the Horn of Africa. In January, an attack on a Turkish cargo ship in the Gulf of Guinea vessel killed one and captured 15 crew members. This surge in piracy is linked to fish transshipment in the region, experts say. The rise of factory fishing hit the local, small-scale fishing sector the hardest. The growth of industrial fishing in the region has pushed many of the traditional fishers out of work. Piracy became a lucrative alternative, one ship’s captain told the journalism network OCCRP.

“I believe the life of the people on board is the most important value and AIS is turned off for their safety and security”, a Green Shipping representative told E&T.

Global Fishing Watch, a monitoring group, insists the AIS signal is a safety feature that helps captains avoid collisions with other ships. Even US Navy warships, normally exempt from the rule, nowadays turn it on in congested waters after a number of high-​profile collisions.

Why not just avoid West Africa altogether? ‘Going dark’ is risky but the business is lucrative. Mol said while the piracy threat for his company’s fleet is significant, it’s not significant enough to quit operating there.

“We should all, including us and Maersk and CMA, stop going to Ivory Coast, Ghana, Benin, Togo, Nigeria, and Cameroon,” he said. Yet E&T found the GreenSea reefer Green Selje loitering in Ghana’s exclusive economic zone (EEZ), and other GreenSea vessels were spotted in economic zones of countries Mol mentioned.