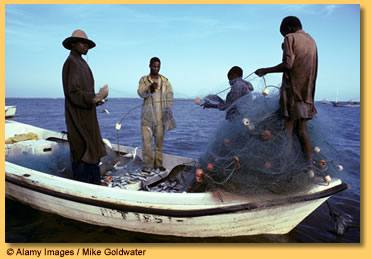 At the base of the Zomba plateau in southern Malawi, more and more villagers are digging ponds to raise fish. Mr. James Chitonya previously grew maize, with meagre returns.

But since he began practicing “fish farming” (also known as “aquaculture”) several years ago, he has earned enough from fish sales to replace his thatched grass hut with a house that has electricity and an iron-sheet roof. “I am also able to pay school fees for my children and buy them clothes,” he told a local reporter. “In addition, I have bought some livestock from the sales of fish.”

Several thousand kilometres away, in the village of Nianing on Senegal’s coast, hundreds of women clean and smoke the 50 tonnes of fish caught annually by kinfolk and neighbours, who venture into the Atlantic in canoes. The women’s processed fish is sold to residents or to companies for export to Asia, principally Japan.

Concerned that overfishing was beginning to deplete the stocks of offshore fish, Nianing’s fishers and fish processors welcomed support from the Senegalese government and the Japanese aid agency to improve management of fishing, the village’s economic mainstay. Not only are these artisans now better organized than they were a few years ago, but they have learned to observe prohibitions against catching certain species at given times of the year, so the fish have time to replenish their numbers.

Since the project began, the value of Nianing’s total fish output has increased by almost half.

Initiatives such as these must be replicated across Africa if the continent is to harness the full promise of its fisheries to strengthen national economies, reduce poverty and improve people’s food security and nutrition, argue promoters of the New Partnership for Africa’s Development (NEPAD)

Since NEPAD’s advent, teams of experts have begun developing action plans for specific sectors, such as agriculture, health and the environment. At a special Fish for All summit meeting in Abuja, Nigeria, in August 2005, African leaders launched the “NEPAD Action Plan for the Development of African Fisheries and Aquaculture.”

In a concluding summit declaration, the leaders expressed alarm over the depletion of Africa’s fish stocks, the degradation of its aquatic environments and threats to the sustainability of its fisheries and aquaculture, especially as the demand for fish is rising sharply. To overcome such challenges, they vowed action to realize “increased benefits from sustainable fisheries and aquaculture.”

In Senegal, as elsewhere in Africa, “Fishing is on the way to revolutionizing itself,” Minister of the Maritime Economy Djibo Kâ stated just a few days after the Abuja summit. Such a revolution is all the more urgent, he added, because the fishing sector as a whole is “in crisis.”

Workers at a fish factory in Senegal. Picture: McKinsey.com

Although fishing in much of rural Africa tends to be overshadowed by agriculture and stockraising, it is not a marginal sector. Fishing provides direct incomes for about 10 million people — half of whom are women — and contributes to the food supply of 200 million more.

According to the WorldFish Centre, an independent research institute headquartered in Malaysia, Africans rely on fish for an average of 22 per cent of their consumption of animal protein. In some countries, the rate is as high as 70 per cent. Fish also provides essential vitamins, minerals, fatty acids and other nutrients crucial to a healthy diet. The poor rely on fish more than others, because it is often the most affordable source of protein.

Fishing also makes a significant economic contribution. In Uganda, for example, lake fisheries yield catches worth more than $200 mn a year, contributing 2.2 per cent to the country’s gross domestic product. They employ 135,000 fishers and 700,000 more in fish processing and trading, and generate $87.5 mn in export earnings.

But under current fishing practices and management methods, Africa’s marine and inland fisheries are reaching their limits. Too many fish are being caught, so stocks are dwindling. Mr. Daniel Pauly, a researcher at the University of British Columbia in Canada, estimates that with the tripling of fishing activity in northwest Africa since the 1970s, the amount of fish in deep waters has fallen by a quarter.

Off West Africa, deep-water fish stocks have declined by half. “This trend is also evident farther south,” he says, “along the African coast down to Namibia.”

The NEPAD Action Plan observes that during the 1980s and 1990s, fish caught in marine and inland waters increased steadily, rising to an average of 7.3 mn tonnes. But output has stagnated since then, reaching only 6.8 mn tonnes in 2002.

Mr. Claude Martin, director-general of the World Wildlife Fund International, notes that a decline in fish output could seriously affect local food security. “A collapse of fish stocks in West Africa,” he said, “can have more serious human consequences than in Europe or North America,” the destinations for most of the region’s fish exports.

Through negotiated agreements between European and African governments, hundreds of European vessels fish annually off Africa’s coasts. These agreements stipulate the types and volumes of fish that can be caught and the royalties and fees the foreign ships must pay to operate in African waters.

But many African countries lack sufficient boats, aircraft, communications equipment and trained personnel to effectively monitor the activities of foreign vessels, to make sure they do not overfish.

The NEPAD Action Plan argues that in marine fisheries, “arrangements that regulate the access of foreign fleets to African fish stocks need to be considered from a long-term perspective on fish supply and economic development opportunities.”

In recent years, a number of African governments have been taking a tougher line when negotiating foreign fishing agreements. In addition to prohibiting fishing during certain times of the year and limiting the overall catch, the new agreements often channel part of the fees paid by the foreign vessels towards strengthening African countries’ surveillance capacities.

Since many fishing zones cross maritime boundaries, neighbouring African countries are also working more closely together to improve monitoring and resolve any disputes that may arise.

Getting foreign ships to operate more responsibly is only part of the challenge, notes Mr. Arona Diagne, president of Senegal’s National Association of Fishers. “Senegalese boats plunder more of the sea’s resources than do foreign ships,” he admits. “When fishers come across a school of fish, they want to take them all.”

One solution, Mr. Diagne argues, is to teach them to fish more sustainably. Another is to invest in fish-processing enterprises, cold storage units, marketing facilities and other infrastructure that will increase incomes and minimize losses, thereby easing the economic pressure to catch so many fish.

Overall, argues the NEPAD Action Plan, African governments need to work together with the private sector to channel more investment into various forms of infrastructure. In both coastal and inland fisheries, these would include landing sites, cold units, road and transport systems and marketing facilities.

To make sure that fishing better helps reduce poverty, it is also important to target enterprise-support programmes, credit institutions and technical assistance towards small-scale fishers and women fish processors.

Across the continent, says the plan, African countries need to develop their capacities to catch and process their own fish. This will help ensure that “revenues and economic rent generated by the sector are reinvested into development interventions.”