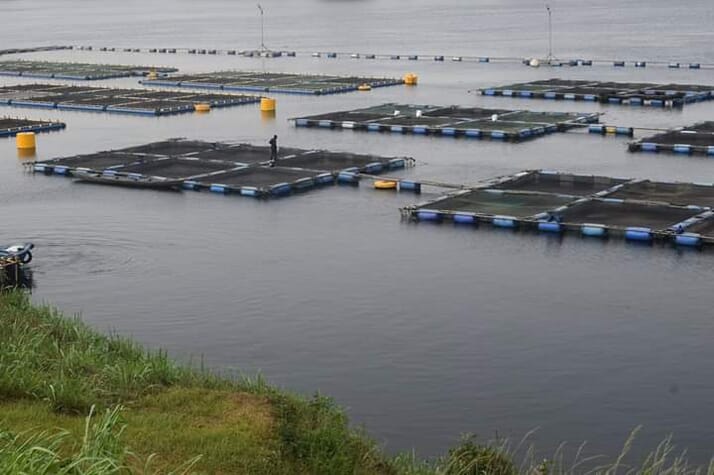 New research, led by a team of UK-based scientists working for Ridgeway Biologicals, concludes that one of the causes of the mass mortalities on the lake is infectious spleen and kidney necrosis virus (ISKNV) – the first confirmed case of the virus in Africa. The report also warns international authorities and producers about the risk of spreading elsewhere in Africa or South America, where it has not yet been detected.
Their findings, recently published under the title, ‘First Detection of Infectious Spleen and Kidney Necrosis Virus (ISKNV) Associated With Massive Mortalities in Farmed Tilapia in Africa’, also suggests that it was possibly spread by the movement of live fish from Asia where the disease is common – speculation supported by their genetic sampling which revealed strains of tilapia that had not originated in Africa.
“If farmers have been illegally sourcing broodstock from Asia and other areas, that would be an ideal method of translocating pathogens from one region to another. It should be noted though that ISKNV has also been detected in internationally traded freshwater ornamental species, theoretically posing another possible introduction route,” they observe.
The researchers carried out PCR sampling and gene sequencing at two farms in separate areas of the lake and found ISKNV to have played a “significant role” in the mortalities experienced at the sites. Although there are limited reports of it causing disease in tilapia, the researchers were surprised to find it associated with such massive mortalities, which has previously been attributed to tilapia lake virus (TiLV).
The disease outbreaks on Lake Volta started from mid-October 2018, when farmers reported that affected fish showed clinical signs including darkening of the skin, erratic swimming and abdominal distension and the authors of the report note that “coinfections with Streptococcus agalactiae and other tilapia bacterial pathogens further suggests that these may interact to cause severe pathology, particularly in larger fish”.
Mortalities reached a high in December, when some farmers registered 80 percent losses. The trend has continued during the first semester of 2019 – quite a number of farms have suspended production, and a significant number of employees have been laid-off. Cage farmers on the lake, who accounted for over 90 percent of Ghana’s aquaculture production (which reached 50,000 tonnes in 2016) have experienced massive losses – both in fry production sites and in ongrowing fish.
However, the researchers remain hopeful that a vaccine against the disease can be developed.
As they note: “Anecdotally, at the time of writing, farmers on the sites visited report that mortalities in on-growing facilities have declined, while fry production continues to be badly affected. It is possible that surviving fry have been exposed to the virus and then protected against subsequent exposure. This suggests that immunization of fry, or use of previously exposed individuals, could represent a practical disease management strategy. Vaccination as a control strategy may be used to control red sea bream iridiodovirus and there are also encouraging reports of its potential effectiveness for protection against ISKNV in other fish species.”
Since the outbreak there has been a shortage of tilapia on the market. Madam Gloria Affutu, a fish dealer, hopes the situation will be swiftly resolved. “I get much less than half the tilapia I normally buy from the farmers on the Volta Lake, and that is very bad for business. I am unable to meet the demands of my regular hotel and restaurant customers. I am told that some farmers are bringing in tilapia from Togo, to meet the demand on the market.”
Officials of the Ghana Aquaculture Association, which represents the lake’s cage farmers, say they are are “cautiously optimistic” about the release of the report as it will allow them “to bring solutions to the table”. They say that their farmers are undergoing a very unpleasant experience, and hope that all issues relating to official acceptance and endorsement will soon resolved to restore the confidence both of farmers and of consumers.

Meanwhile a source has asked The Fish Site toemphasise that the virus, and fish infected by it, do not pose any threat to human health.