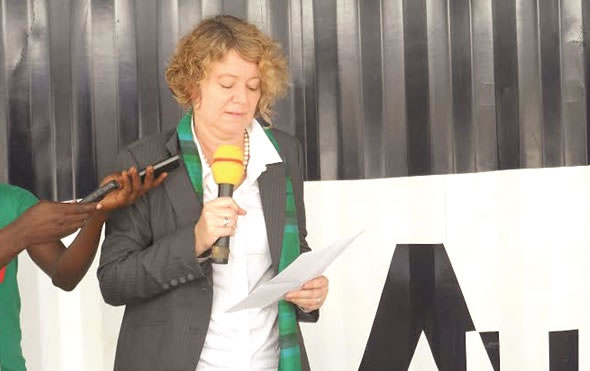 The government has been called upon to reduce import duties on imported fish feed to improve the fishing industry by reducing the high cost of operation in the sector.

“Reducing import duties on the produce would rather help the government to earn more revenue as against the current situation where high import duties and bureaucracies prevent importers from importing fish feed,” the Chief Executive Officer (CEO) of African Golden Tilapia Farm Limited (AGTF), Mr Peter Adzikah, told the GRAPHIC BUSINESS at Senchi, Amanfrom.
He was speaking at the opening of a fish feed packaging company, Aller Aqua Ghana Limited, at Senchi Amanfrom in the Asuogyaman District of the Eastern Region.
Aller Aqua Group is Europe’s largest producer of environmentally friendly fish feed.
The company produces fish feed for aquaculture, which is exported to more than 60 countries worldwide from factories in Denmark, Poland, Germany and Egypt.
The Ghana office is expected to be a hub, where the imported fish feed would be bagged for sale to fish farmers in the country.
Investing in agriculture

The Royal Danish Ambassador to Ghana, Madam Tove Degnbol, said she was hopeful that the investment would support the development of aquaculture in the country.
She added that supporting the needed training and knowledge transfer between the two countries had always been the priority of the Danish Government.
The ambassador said the embassy had been supporting the aquaculture companies, especially those in tilapia production, to access business partnership.
She also noted that the embassy’s plan was to encourage Danish investors to invest in Ghana, since there were potential opportunities to do business.
Madam Degnbol said the embassy had also advised investors to form partnerships with their local counterparts.
The ambassador said land acquisition, frequent power cuts, infrastructure and demand of illegal fees were hindering Danish business in the sector.
She commended the Asuogyaman District Assembly for their effort to facilitate aquaculture production in the district.
She said the embassy had received more and more interest from Danish investors wanting to do business in Ghana.
Aller Aqua Ghana

The Country Manager, Aller Aqua Ghana Limited, Mr Emmanuel Fosu, expressed the hope to contribute to the growth of the individual fish farms, as well as the aquaculture industry as a whole.
He said Aller Aqua Ghana would be offering high-quality fish feed for aquaculture in Ghana and the neighbouring countries.
Mr Fosu said the reason for the location of the warehouse in the district was the Volta Lake and the amount of farmers operating around.
The country manager said aside availability, quality and consistence being key in the company’s operations, getting the feed closer to the farmers was their priority.
He said the idea was not to import totally but this was the first phase and as the business grew, phase two would be pursued.