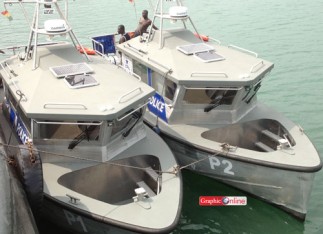 Six boats have been secured by the Marine Unit of the Ghana Police Service to enhance the country’s maritime security.

Personnel have already been trained to man the boats which have been well equipped for security operations.

The personnel of the unit have been taken through specialised training in swimming, karate, weapon handling, surveillance and observation, patrol rescue operations, the Fisheries Act and Regulations.

The unit would collaborate with sister-security agencies to deal with security issues associated with crimes in the oil, gas and fishing industries.

The acquisition of the boats is part of the moves by the government to make the country’s coast unattractive for illegal activities such as piracy, illegal fishing, drug and human trafficking.

A senior police official told the Daily Graphic yesterday that the boats would be commissioned at a ceremony in Takoradi on Friday.

The marine unit was re-established following increasing security challenges along the coast with the discovery of oil.

Some vessels at the anchorage of the Takoradi Port  have been attacked by offshore robbers who use canoes to get on board the vessels.

Additionally, some fishing companies expected to fish in the deep sea, flout the laws and,in most cases, fish within the restricted coastal areas or within the 30 metre contour which is reserved for canoe fishing or as breeding grounds for fish.

Even though the Ghana Navy is in charge of maritime security, the establishment of the Marine Unit of the Police is expected to complement its efforts.