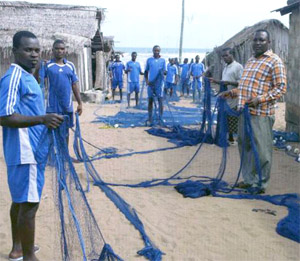 Fishermen at Ahobre, a fishing community near Half-Assini in the Jomoro District of the Western region have stated that pair trawling in the country’s waters in the area is destroying fish and other fishing gear worth thousands of Ghana cedis.

They explained that pair trawling is a fishing activity carried out by two big boats, with one towing each warp, and they normally move close to the shoreline thereby destroying the sea bed and denying fish the needed nutrients for growth.

The aggrieved fishermen noted that the operators engaged in pair trawling fish around the clock, indicating that they normally fish in the night to avoid detection.

The fishermen have therefore called on government to totally ban pair trawling in Ghanaian waters and ensure the effective enforcement of the ban to the letter to avert the depletion of the fish stock.

According to Mr. Denku, his canoe with the inscription “Emmanuel No.2” set off on Thursday at about 3.00 pm on a fishing expedition with a crew of 15 young fishermen.

He said at about midnight the fishermen who had then cast their nets into the sea, saw the pair trawlers approaching the area reserved for canoe fishing.

Mr. Denku, who owned two canoes in the Ahobre community, continued that the trawlers moved closer to the area where his canoe was operating, dragged the cast nets along with their warp and destroyed about 35 fishing nets and other expensive fishing equipment in the process.

He added that three out of the 15 young fishermen in the canoe managed to get onboard one of the trawlers when they realized that the big boats had destroyed their nets beyond repair.

He said they also managed to capture the name of one of the trawlers, AF681 KOSUCOS Limited, which they believed was from Tema.

He added that there were some whites suspected to be Chinese and Koreans as well as some Ghanaians on board.

He indicated that the operators negotiated with an Axim-based fisherman to send the three fishermen back to Ahobre, adding that in the process, the fisherman collected 40 cartons of fish from the operators before bringing the other fishermen to the shores of Ahobre.

Mr. Denku therefore called for an effective enforcement of the ban on the activities of the operators who he alleged were hampering the fishing industry.

Nana Kwamena Kaya II, chief fishermen of Ahobre said “the unwholesome practice has destroyed the habitat of the fish, killed small fish and driven others away.”

He called for adequate resources for the Fisheries Commission, the Ghana Navy and the coastal communities to effectively carry out monitoring, control and surveillance activities in the country’s waters.

He again proposed the re-establishment and institutionalization of community-based fisheries management committee structures at the community, district, regional and national levels to help police the country’s waters.

The chief fishermen pledged his commitment to ensuring that his people complied with the ban on the use of light for fishing.

He therefore appealed to the security agencies to arrest any body who uses light to fish.