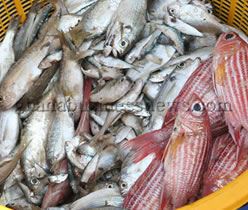 Mr Kwesi Ahwoi, Minister of Food and Agriculture, on Tuesday re-iterated government’s determination to ensure that the rule of law prevailed in the country’s fishing industry.

He said most fishermen and fishmongers were aware that fisheries resources were not infinite and therefore, like other natural renewable resources, should be managed sustainably to protect their livelihoods and investment.

Mr Ahwoi made the call at the inauguration of a new taskforce for the enforcement of the Fisheries Act of 2002(Act 625) and the Fisheries Regulations 2010 (LI 1968) to ensure that the fisheries sector contribute effectively to the country’s socio-economic development.

The taskforce, made up of personnel from the Ghana Navy, Ghana Police Service, Bureau of National Investigations (BNI) and Fisheries Commission, would be provided with the necessary logistics to undertake their mandate.

Mr Ahwoi said concerned majority of fishermen had the impression that government had not performed as expected with regard to enforcing the fisheries law and regulations and that could result in the loss of their livelihood and investments in the near future.

He pointed out that this impression culminated in the recent demonstration by the fishermen calling on the government to implement the fisheries law and regulations to ensure rule of law prevailed in the fishing industry.

Mr Ahwoi said government would be failing in protecting the interests of fishermen whose livelihood depended on fishing when it failed to take necessary steps to ensure compliance with the law and regulations that would eliminate vices in the fishing industry.

He explained that the fisheries sector directly and indirectly supported the livelihood of about 2.4 million people in Ghana and accounted for about 60 per cent intake of animal protein for the population thereby ensuring not only good health for the people but mental sharpness in children due to omega three amino acids.

Mr Ahwoi said government would not allow an insignificant and insensitive minority of fishermen to plunge the fishing industry into distress and disarray through their illegal fishing activities.

“We cannot afford as a nation to jeopardise the health of our people, render 2.4 million people unemployed and lose foreign exchange, as a result of lack of enforcement of the fisheries law and regulations,” he added.

Mr Ahwoi announced that the Ministry of Food and Agriculture (MOFA) in collaboration with the Ghana Navy were acquiring four patrol boats from China at an estimated cost of $75.4 million for surveillance activities and policing both the coastal and offshore waters of Ghana.

He said the taskforce had been empowered to mount surveillance within two kilometre radius from any shore or river to search and seize any illegal equipment, explosives and poison that could potentially be used to flout the act.

Mr Ahwoi urged fishermen at the various landing beaches to cooperate with personnel of the taskforce to ensure success of their operations.

Lieutenant General Joseph Henry Smith, Minister of Defence, appealed to fishermen to co-operate and support personnel of the taskforce in their operations to make the desired impact on the fishing industry.

He said the Ministry of Defence would collaborate with the Police, BNI and MOFA to safeguard and protect the country’s fisheries resources from being exploited.