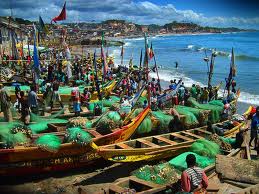 Ghana’s dwindling fishing industry could reach an irreversible damage due to the offshore oil exploitation. The new crusading guide has observed.

As the economy struggles to find antidote to illegal fishing practices such as the use of dynamics and monofilaments in its territorial waters, records at the Fisheries Commission (FC) are pointing to a worsened situation as a result of the oil exploration.

Records indicate that the influx of hundreds of oil supply vessels since the commencement of oil production in 2010 is having a toll n fishing activities.

The Commission has recorded the destruction of several fishing canoes and nets by oil supply vessels.
In 2012, one of such accidents resulted in into death of one fisherman near Elmina in the central region.

This discomfort at sea is compelling many fishermen to abandon fishing, especially as they face very low catches over the last few years.

Besides, the Jubilee Partners, Ghana Jubilee Field Operators, have earmarked a 500 kilometre radius from the oil rig as a restricted zone from fishing activities.

That, fishermen say, is another disincentive to fishing, claiming most of the fishes were attracted to the said zone due to the lights on the rig.

Currently, about 22 additional offshore oil discoveries have been made, indicating more restrictions at sea for fishermen with the application of the 500 kilometre radius mechanism when the production commences on those additional finds additional finds.

The plight if fishermen have also been worsened by the flooding of beaches in the western region with sargassum, abrownish sea weed, with a very unpleasant odour when decomposed, thus, creating health problems for fishing communities.

The weed also inhibits fishing as fishermen often get their nets filled with such weeds during their expedition at sea.

Although no empirical evidence has been adduced fishermen believe the invasion of the weed was as a result of the drilling of the oil at the Jubilee Field.

Experts in marine resources also say the frequent dying of whales along the coast of the Western Region since the commencement of oil production at the Jubilee Field was an indication that all was not well with the country’s marine resources.

On record, a total of 23 whales have been washed ashore in the Western Region since 2009 with most of the deaths occurring in the oil and gas districts such as Jomoro and Ellembele.

Fish species such as Palegic and Sardinella, the fisheries commission say, are becoming extinct in the country’s water in the last five years.

As it stands now, Ghana is unable to meet even half of its fisheries requirement as it produces only a little over 400,000 metric tons per annum as against a demand of 960,000 metric tons.

The Western Region alone contributes about 300,000 metric tons t the country’s fisheries production but the challenges emerging from the oil would apparently affect the region’s contributions, experts say.

Ghana’s fish stock over the last 10 years, according to the commission, it has been declining by an average of 10-12 per cent every year.

This trend, experts say if continues, could plunged the country into fish crisis as Ghana’s fish consumption still remains as high as 25 kilos per capita, significantly above the world’s average of 15 kilos per capita.

Speaking to the new crusading guide, the western regional president of the Ghana National Canoe Fishermen Council ( GNCFC), Nana Kojo Konduah, wondered why government could be so lukewarm in addressing challenges in an important sector like fisheries .

He said 10 per cent of Ghana’s population was into fishing, mostly found along the country’s 55 kilometre coastal stretch therefore; government should attach ample importance to the fisheries sector.

He urged government to implement drastic measures to address current and future challenges from the oil find on fisheries which include restrictions canoe accidents with supply vessels and other environmental concerns.

“The time to act is now. Government shouldn’t wait for things to get out of hands” he said.
Solomon Kusi Ampofo, programmes officer of Friends of the Nation (FoN) , a Takoradi-based Non- Governmental Organisation, believes government needs to do more o strengthen state regulatory institutions to properly deal with the management of coastal resources.

“the Fisheries Commission should demarcate fisheries protected zones as pertained in the fisheries commission act in order to preserve the country’s fisheries resources, especially in the midst of the current rampant search for oil deposits n our territorial water”, he urged.