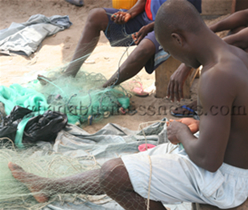 The National Executive Committee of the Ghana National Canoe Fishermen Council (GNCFC) on Tuesday called on the government to enforce the Fisheries Regulation Law 2010 (L.I. 1968) in totality to bring sanity into the industry.

“The law enforcement agencies should go the whole hog to enforce the regulation to the fullest extent,” Nii Abeo Kyerekuandah IV, Executive Secretary of GNCFC said.

Addressing the media on the recent demonstrations by selected fishing communities against the passing of the Fisheries Regulation Law a few months ago, Nii Kyerekuandah called for the blanket enforcement against all bad and unacceptable fishing practices.

Parliament enacted the Regulation late last year to give effect to the fisheries Act 2002 (Act 625) and prescribed measures for conservation, management and development of fisheries and aquaculture in Ghana.

The law outlawed bad practices such as pair trawling, light fishing, use of under-size mesh nets, monofilament or rubber nets in marine fishing, dynamite and harmful chemicals in fishing.

Nii Kyerekuandah said the recent demonstrations in some coastal areas by some fishermen against the law were uncalled for because the legislation was to protect them and future generation.

“I believe we all know that fishing, like farming, is time honoured indigenous vocation which has been passed on from one generation to another and in conservative terms it is currently providing means of livelihood to about 10 per cent of Ghana’s population.

“It, therefore, stands to a reason… that it is an industry that deserves to be given adequate attention, recognition and support,” he added.

He said gone were the days that the wealth of aquatic resources was assumed to be unlimited gift of nature, adding that with increased knowledge and the dynamic development of fisheries after the Second World War, the myths had faded in the face of the realisation that aquatic resources, although renewable, were not infinite and must be properly managed.

Nii Kyerekuandah said Ghana was not the only country where fishing was an important industry and cited other African countries such as Togo, La Cote d’Ivoire, The Gambia, Senegal, Angola, and Mauritania where their fisheries laws were enforced with all the rigidity that it required.

There was a general consensus among the fisher folks present that the law was made to protect their interest and called on others to join hands with the enforcement agencies to ensure compliance.