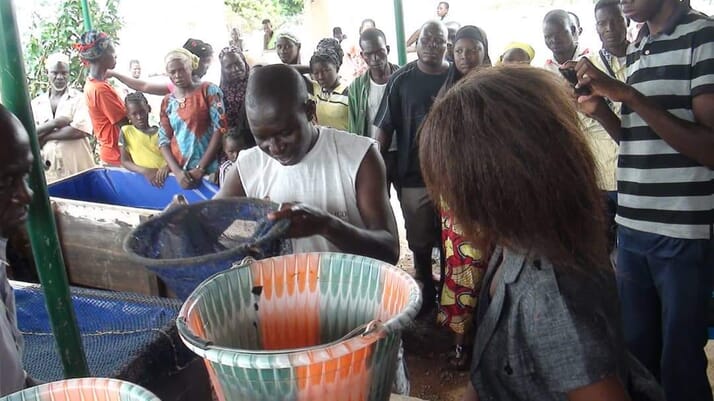 With a surge in domestic demand, and a bold new initiative, Burkina Faso has ambitious plans for its aquaculture. But can this land-locked African nation really achieve a 40-fold increase in fish production within a year?

As in many African countries, urban dwellers in Burkina Faso have caught the tilapia bug, big time. In most parts of the capital, Ouagadougou, and other big towns, customers can be found gathered at tilapia grill joints, patiently waiting their turn. Tilapia is a favourite item on the menus of hotels and restaurants, and patrons are prepared to pay over US$3 a kilo. Most of the tilapia consumed in the country is imported, however – despite a number of past aquaculture initiatives annual production has barely approached 500 tonnes.

However, thanks to an initiative led by SkyFox, a Ghanaian firm operating in several West African countries, Burkina Faso is expected to produce at least 20,000 tonnes by the end of 2020. And Dr Oliver Ujah, deputy CEO of the company, says that “production could hit higher figures in the next few years”.

Burkina Faso, a landlocked Sahelian country, has always faced problems with water scarcity. There are numerous small reservoirs, mainly in the central region, which were created to store water to support food production. The rainy season, from June to October, barely provides enough water. In the 1980s some sizeable dams were constructed, with reservoirs aimed at developing aquaculture. But these were mainly dormant until recently, when SkyFox entered into an agreement with the government.

“The SkyFox intervention,” says Dr Ujah, “has involved refurbishing the reservoirs to support efficient fish farming. With the active support of the relevant government agencies, we have put one reservoir at Poa into production. The reservoirs at Bagré, Sebun and Zia will go into production next year.

“Although the four reservoirs have massive capacity, they were only doing very modest production figures until the SkyFox intervention. Our interventions have involved some re-engineering, but the major input that was lacking in the past was technical expertise, which we have provided. Another major challenge was quality feed. Presently, we are supplying feed from Ghana. But we are refurbishing the feed plant at Bagré, which will provide quality feed for all four projects. I can tell you that we are satisfied with the results. By the close of next year, we expect to produce over 20,000 tonnes of tilapia.”

Over the past decades, many well-intentioned aquaculture projects have been implemented in Burkina Faso, but they have largely failed. Apart from their lack of relevance to the local conditions, the skills and institutional framework were not there. Dr Charles Biney, a water-resources expert and former director of the Volta Basin Authority in Burkina Faso, is excited about this development, and believes that it has many positive implications for the country.

“Burkinabes love tilapia. But the bulk of tilapia available is imported from different sources. It is great that they will now enjoy homegrown tilapia whose quality can be guaranteed, and the nation can save some precious foreign exchange. And in a country that has always been conscious of the need to maximise water use, it is good that this scarce resource is being put to profitable use,” he says.

Patrick Apoya, CEO of SkyFox, believes that aquaculture has the potential of making a major contribution to Burkina Faso’s economy.

“The aquaculture value chain is big. From input production and supply to farming, to processing and marketing, this is a long chain that can generate jobs for many young people, and profits for people in business. Burkina Faso is well placed to export fish to its neighbours, especially Mali and Niger, and to customers well beyond its borders,” he says.

He believes that there are possibilities for reviewing many reservoirs and fish farm projects that have not registered the desired success. Many aquaculture projects have been installed by different donor agencies over the past decades. Whilst these were well intentioned, they failed mostly because they were unsuitable for the environment, and often did not get any support from government.

“We will take a look at them. It may be possible to bring some of them into profitable production, perhaps in partnership with others,” he reflects.

Increased local aquaculture production will certainly make a contribution to improvement in protein consumption. Currently, per-capita beef consumption is 8kg a year, while fish consumption is 3.5kg. In Burkina Faso’s southern neighbour, Ghana, per-capita consumption for beef is 9.2kg, whilst that for fish is 23kg. Gifty Brown, a Ghanaian businesswoman based in Burkina Faso, says that increased aquaculture production will make a big difference in the health of Burkinabes, especially young people.

“Fish is essential to the maintenance of balanced diet, but here it is expensive. I have noticed some locally produced tilapia on the market. With increased local production, ordinary people should be able to afford it,” she says.

As in most African nations, Burkina Faso’s population of 20 million is becoming increasingly urbanised, as more young people move to the cities and towns in search of jobs. They have already acquired a taste for tilapia. If current trends are anything to go by, tilapia will reward them handsomely in several ways. For example, in the process of producing fish feed, maize and other inputs, farmers will be able to find better markets for their produce. And it could instill a more effective approach to water management in the country.

As Patrick Apoya says: “A major plank of SkyFox’s operations is to help reduce the huge waste involved in food production, and to maximise water use. We are going to use this opportunity to leverage aquaculture into helping Burkina Faso to make the most profitable use of her water resources.”