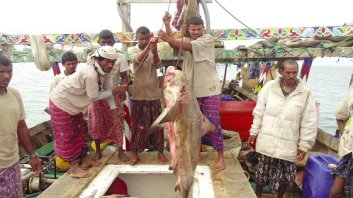 The Djibouti coastguard unit has arrested red-handed last Thursday a dozen offenders on board a dhow on the maritime waters of the tourist area of Arta where all fishing is prohibited.

A routine patrol coast guard last Thursday Djibouti led to 18H on the arrest of pirates aboard a dhow registered in Yemen off the beach of Arta.
The defendants, twelve in number, were caught in the act of illegal fishing in this tourist area where all fishing is prohibited.
Moreover, this place is known to receive annually visited by whale sharks, these harmless giants that fans come to admire.

After taking illegal fishers’ hand in the net, “the Coast Guard searched the hold of their” galba “(trawler) where they found a ton of fish, including many protected species. Physical evidence that have been seized.
The boat is also immobilized in the fishing port of Djibouti. And his crew are repeat offenders, according to the findings of the investigation of the brigade of research and investigation of this new body that is keeping watch against looting of the seabed of the country. In short, the suspects were brought to justice to answer for their crime.